Peace has returned to South African communities riven by the recent xenophobic violence, and the supply of food, shelter and other support for foreigners forced to flee their homes has been stepped up, Minister in the Presidency Jeff Radebe told a press briefing on Tuesday. 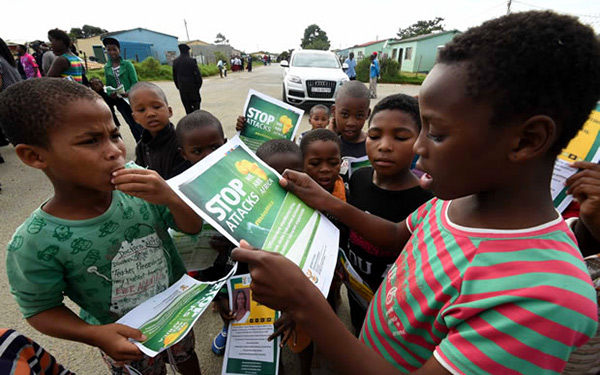 Children read anti-xenophobia booklets during a peaceful walk against attacks on foreigners, in Mzamomhle Township near East London in the Eastern Cape on Sunday 26 April.
(Image: GCIS)

“We want to reassure those who have plans to travel to South Africa that our government is in charge. The violence has stopped,” Radebe told the media at the first briefing by the Inter-Ministerial Committee (IMC) on migration, held in Pretoria on 28 April.

“We are now working hard to ensure that nobody within the borders of our country is victimised based on their country of origin.”

The IMC was set up to examine the underlying causes of the tension between South Africans and foreigners, and deal with the aftermath of the violence. Radebe chairs the committee.

The briefing confirmed that seven deaths can be linked to the recent outbreak of violence. Four of the victims were foreigners and three South African.

The details of the victims, nationality, nature of death and status of investigation are as follows.

Preliminary investigations suggest the death of Mozambican citizen Manuel Jossias, also known as Emmanuel Sithole, to be the result of a criminal act, not xenophobic violence.

“The IMC on behalf of the South African nation extends its deepest condolences to the families of those deceased, and wishes those injured a speedy recovery,” Radebe said.

The National Prosecuting Authority is making the prosecution of cases related to attacks on foreigners a priority, the briefing was told. “Perpetrators of these crimes can expect that prosecutors will ask courts to impose sentences of direct imprisonment.”

The Department of Justice and NPA have set up dedicated courts in KwaZulu-Natal to ensure the speedy prosecution of the cases. The South African Police Service has allocated detectives in all provinces to expedite the investigations in cases related to xenophobic violence.

“We are not taking a business-as-usual approach,” Radebe said. “We want to ensure that the perpetrators of these vile acts are dealt with as speedily as possible.”

Caring for migrants in shelters

The Department of Social Development is coordinating the government’s material and psychological support for 812 foreigners currently living in shelters.

“We encourage those who require counselling services to call 0800 428 428,” Radebe said. “The trauma counselling call centre is operational 24 hours a day. We have so far provided 2 000 mattresses, food, blankets, dignity packs, baby formula and clothing items to displaced persons at the various shelters.”

The Department of Health is providing primary healthcare and medical services to foreigners, wherever needed but including in the temporary shelters.

The social development department has also assessed conditions at temporary shelters in KwaZulu-Natal and Gauteng to determine the immediate needs of women and children.

“Pregnant women and people with disabilities have been transferred to secure shelters,” Radebe said. “Retired social workers were also deployed to the temporary shelters to strengthen the psycho-social services.”

Radebe said reports that some foreigners had already begun to return to their homes in South African communities were encouraging. Sufficient numbers had returned home to allow the Elsburg Shelter to be closed on Friday 23 April. Those still not able to leave were taken in at the Primrose Shelter.

“As the situation continues to stabilise, we call on foreign nationals who are still in shelters to work with the departments of Cooperative Governance and Traditional Affairs and Community Safety to ensure a smooth reintegration process,” he said. Radebe also urged communities to welcome returning foreigners and help with their reintegration.

The Department of Home Affairs is working to verify the immigration status of displaced migrants, Radebe said. Those in the country illegally were being detained for prosecution or deportation.

“In cases where the displaced persons have no documentation or they are in the country illegally, the department still captures their details,” he said. “Their information and fingerprints are captured in order to provide documentation to facilitate their repatriation.”

Home Affairs is also working with foreign missions in South Africa to ensure the smooth repatriation of those wanting to voluntarily return to their home countries. About 1 507 documented foreigners are currently awaiting repatriation.

“We have thus far repatriated a total of 1 997 undocumented migrants from both KwaZulu-Natal and Gauteng temporary shelters, 911 to Malawi, 316 to Mozambique, 753 to Zimbabwe, and 17 to Tanzania,” Radebe said.

South Africa still a home for all Africans

The government is committed to finding a lasting solution to prevent the “shameful” attacks from happening again, Radebe told the briefing.

“We believe that issues of migration can only be resolved by taking a holistic approach that deals with all issues highlighted by communities. This includes identifying and resolving challenges highlighted by local traders.” The Department of Small Business Development will be investigating these issues.

Despite the tragic events of the past weeks, Radebe said, Africans from other countries still consider South Africa a safe place to visit.

In March 10 548 people from Ethiopia, Malawi, Mozambique, Tanzania and Zimbabwe visited South Africa. In April, 13 533 people visited from these countries.

“We are heartened that our brothers and sisters on the continent still consider our country a multicultural society that welcomes and promotes interaction among people of different backgrounds,” Radebe said.