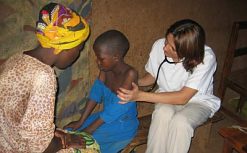 A health worker in Namibia attends to a
12-year-old HIV-positive girl, currently on
a course of antiretrovirals. (Image: Sybella
Moumtzis, World Health Organisation)

A new rating system for African pathology labs, many of which are unaccredited, could see the standard of disease diagnosis on the continent reach a new high in within two years.

Launched on 27 July in Kigali, Rwanda, the system is an initiative of the World Health Organisation and the US government in the form of the President’s Emergency Plan for Aids Relief (Pepfar).

Representatives from 13 African countries, as well as the two partners, were in attendance.

Many developed countries use a lab accreditation system that results in a simple pass or fail. This system is expensive and time-consuming, and is a deciding factor in the scarcity of accredited African labs.

Another is the lack of efficient operating and management structures which should move labs towards the required accreditation standard.

The new system will give laboratories a reliable roadmap towards accreditation. It uses an incremental scale between one and five points, with the top-of-the-range five-point rating equating to a good lab in a developed country.

Under this system, instead of passing or failing outright, the applicant gets an initial rating and the chance to move up the scale by improving their quality of service over time.

The five-step programme starts with an in-depth assessment and is followed by training and education in identified areas of concern. As labs gain more points, they move closer and closer towards the standard needed for international accreditation.

The programme is to be implemented by the US Centers for Disease Control and Prevention, based in Atlanta, Georgia.

The organisation carried out a survey of African labs currently without accreditation, and estimates that the present standard of about 60 labs is such that they are capable of attaining a two- or three-point rating within two years. This will put them on a par with an average lab in a developed country.

Accreditation is crucial in raising the bar of African pathology work because it means that labs are proven to be capable of performing to a set quality standard.

When people’s health is on the line, this capability becomes even more important as errors or sloppy work could result in a bad diagnosis and worse, loss of life. Trained staff will also quickly be able to tell if treatment is not working, or if patients are developing a resistance to their medication.

Former US president Bill Clinton, who addressed the Kigali launch via video, had high hopes for the initiative and its sister programme. This was launched at the same time, and involves the concurrent training of African lab technicians by volunteers from the American Society of Clinical Pathology as well as Clinton’s own HIV/Aids Initiative.

“Together we can build a system where labs are well managed, provide high quality testing, produce reliable and timely results, where staff morale is high, money is not wasted and the standard of care bolsters the health of the global community,” commented Clinton.

More accredited laboratories in Africa and a better standard of pathological work will attract more funding from international companies and organisations, and will boost the reach and efficiency of existing health programmes such as Pepfar and the Global Fund to Fight Aids.

John Nkengasong, of the US Centers for Disease Control’s global health programme, foresees a better situation for African labs in the future. “There is funding for laboratories in the large programmes, such as the Global Fund,” he said, “but what countries have lacked so far is a blueprint for how to spend it.”

Figures from the World Health Organisation reveal that more than 2-million people die from Aids in sub-Saharan Africa annually, with the same number succumbing to tuberculosis. There are about 1-million malaria deaths every year. Yet the continent’s labs are ill-equipped to contribute to the improvement of this state of affairs.

According to nature.com, there are only 28 accredited labs in the whole of sub-Saharan Africa, excluding South Africa. The country has its own South African National Accreditation System, established in 1996. It is the only recognised accreditation system on the continent, and oversees all accreditation of testing and calibration facilities in a range of disciplines.

None of the 28 accredited labs elsewhere in Africa are in the public sector. In many countries the situation is dire. Rwanda, the launch country with a population of roughly 8.4-million, has one internationally accredited lab and only a handful of trained lab technicians. Other countries don’t have even one such facility.

Experts have warned that the forthcoming enhanced quality of lab services must be accompanied by an increase in the ability of doctors to correctly interpret those results.