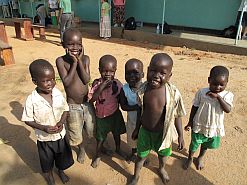 Children’s basic rights in Sudan will now be better protected, thanks to a breakthrough agreement between the United Nations Children’s Fund (Unicef) and Darfur’s biggest rebel group, the Justice and Equality Movement (JEM).

JEM has been locked in bitter conflict with government forces in Darfur, Sudan’s largest and most war-ravaged region, for several years.

Top of the agreement’s priorities is putting an end to child soldier recruitment. JEM has committed to prevent and stop this practice, and has vowed to release any youngster under the age of 18 associated with it, to Unicef.

The pact, signed in Geneva, Switzerland, on 21 July 2010, will also give the UN agency access to JEM’s bases, which will boost its child-protection capabilities.

“For these commitments to have a real impact for children, they must be honoured, enhanced and fully implemented,” said Radhika Coomaraswamy, UN secretary-general Ban Ki-moon’s Special Representative for Children and Armed Conflict, in a statement.

The rebel organisation has promised to “actively support Unicef work on the protection and well-being of children affected by the conflict in Darfur”, the UN agency said in a statement.

JEM has effectively agreed to help defend children’s rights in many ways, including protecting them during conflict. “It’s taken more than two years to get here,” Nils Kastberg, Unicef’s Sudan representative, said about the agreement.

Unicef is also working to achieve similar agreements with other armed movements in Sudan “to enhance the protection of children” in the country.

Negotiators of the agreement included African Union mediators on Darfur, the UN and the UN Office for the Coordination of Humanitarian Affairs.

Unicef is advocating for more schools to be built in Darfur and for other humanitarian measures to be introduced to prevent children from gravitating to armed groups. Although children are not always recruited, they are somehow attracted to rebel groups’ barracks, the agency said.

Since Graça Machel, now Nelson Mandela’s wife, published her 1996 study on the impact of armed conflict on children, there has been “enormous progress on the protection of children” in the world, Unicef said.

Indictments issued in recent years by the International Criminal Court condemning the recruitment of child soldiers have also been effective. “We gradually see that armed movements recognise that involving children has consequences …” Kastberg said.

Children are among the most affected by the Darfur conflict, which has led to the death of about 300 000 people and displacement of 2.7-million others in the past seven years, according to UN estimates.

Former South African president Thabo Mbeki is working with other African leaders to bring about a permanent peace agreement in the country.