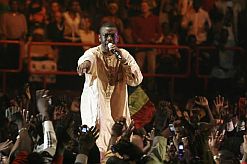 The efforts of non-profit organisation
IntraHealth make the job of healthcare
workers in Africa that much easier.
(Image: IntraHealth)

A group of musicians, among them Grammy-winning singer Youssou N’Dour and South African-born DJ/producer Gavin Hardkiss (aka Hawke), have created an album to raise funds for wider distribution of open source software among health workers in Africa.

The group has collaborated with non-profit organisation IntraHealth International under the umbrella of its OPEN initiative, which operates in developing countries, to facilitate access to infrastructure, design and implement open source healthcare solutions, and boost skills development to maintain those solutions.

The OPEN Remix campaign, which went global in February 2009, is the brainchild of IntraHealth and Senegalese superstar N’Dour, a true pioneer of African music. Its aim is to raise awareness of open source resources and the need to make this essential software more widely available to workers in the field, thereby advancing health care in Africa.

Since open source software is flexible and collaborative, users and programmers are always looking for ways to improve it, and it can easily be tailored to fit specific needs. In addition, it is inexpensive and ideal for use in environments where resources are limited.

With targeted training, developers and health professionals in Africa can use open source solutions to create and customise their own systems. This eliminates the necessity for proprietary software, which most can ill afford.

“Open source technologies let us address health challenges collaboratively with African developers in the lead,” said N’Dour. “If we invest in open source development training in Africa we will be supporting self-sufficient health professionals able to use technology and customise programmes to address their critical health challenges.”

IntraHealth CEO Pape Gaye, also a Senegal native, added that he believed the initiative would foster a new generation of technology and health professionals, and national leaders who understand, use, and support open technologies to improve health.

“IntraHealth supports affordable and creative solutions to the biggest health and infrastructure problems in the developing world by putting the focus on the local health worker,” he said.

IntraHealth OPEN helps health practitioners in many ways. Nurses use PDAs to screen HIV-positive patients at clinics and store patient data. Based on patients’ responses to a specific set of questions, the devices can suggest the next action and even reduce the load for doctors if the situation can be handled by a nurse.

Students use geographic information systems to track the spread of infectious diseases. Health workers use mobile phones to gather data from women and children in rural households – the data is submitted to the district health office, which uses it to plot health trends in the area.

These, and other examples, show how technology and open source software can be leveraged for the benefit of Africa’s poorest citizens.

N’Dour has donated Wake Up, one of his recent hits, to be freely mixed and altered by the musicians involved, and the result is a host of different versions ranging from hip hop and blues to electronica, trance, and world. The singer also showed his commitment to the project with a full page ad in Time magazine at the start of the campaign.

The 10 songs on the digital-only album may be freely downloaded and shared, in the spirit of the open source philosophy. However, supporters are encouraged to make a donation to the cause. Various distribution partners, including Amazon MP3 and iLike, have come on board to help spread the word, and the music – although the former is only available to US-based users.

In April 2009 IntraHealth OPEN plans to launch a global remix competition, in partnership with social network and music collaboration tool Indaba Music. Supporters will get the chance to submit their own versions of the song and with over 125 000 members in more than 170 countries, the OPEN Remix project will receive valuable exposure and momentum. Winners will be announced in May at the Global Health Council in Washington, D.C.

Working together to save lives

Youssou N’Dour, described in 2004 by Rolling Stone magazine as “perhaps the most famous singer alive” in his home country Senegal and the greater Africa, is an activist and humanitarian as much as he is a world-famous musician.

“I have been blessed with many gifts,” said the singer. “I want to use my voice and my celebrity to give back to the communities that have supported me. I am making a renewed commitment to use my influence in the fight against illness and poverty in Africa. I believe this is my duty, as it is the duty of all Africans.”

An ambassador for the 46664 movement, N’Dour has led efforts to overcome the scourges of malaria and Aids in Africa, and has also worked to bridge the continent’s digital divide. “Better organised, efficient, affordable and sustainable systems save lives,” he said.

Based in North Carolina, US, global organisation IntraHealth consults with governments and private institutions in developing countries to design and implement customised open source solutions. The organisation has been in existence for almost 30 years and has active projects in 12 nations on four continents, addressing a range of health and social issues including HIV/Aids, malaria, and family planning.

The organisation’s OPEN initiative was formed to help expand access to infrastructure, develop tools that are viable and cost-effective, and boost the skills needed to efficiently implement and maintain these tools.

The initiative is overseen by a council comprised of leading technology, entertainment and public health experts. These include the Linux Foundation, Red Hat Linux, the Center for Children and Technology, Motorola, Novell, and the David and Lucile Packard Foundation.

According to IntraHealth, Africa has a long way to go in terms of connectivity – the organisation says that the 400 000 citizens of Luxembourg share more international internet bandwidth than Africa’s entire 900 million.

However, the continent is making progress, with broadband now available in over 30 African countries, and mobile phone use growing at twice the global rate. The International Telecommunications Union (ITU), a division of the United Nations, reports that in terms of the global mobile pre-paid market, 90% of customers are located in Africa.

The ITU also says that there is a higher percentage of the population connected to the internet in Senegal than there is in India. Kenya has 500 000 more internet users than Ireland, while Nigeria has 10-million, more than twice as many as Norway. While lack of infrastructure has forced many African countries to rely on expensive satellite connectivity, a number of undersea cable projects are expected to alleviate that problem once they become operational in months to come.