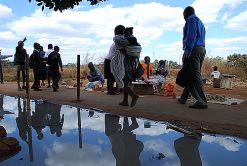 Ordinary Zimbabweans have been hardest
hit by the deteriorating situation in their
country – many now seek better fortunes
in neighbouring countries.
(Image: Irin News)

Earlier this month South Africa announced that it would allow neighbouring Zimbabweans free, unfettered access to its border and allow Zimbabweans to stay in the county without a visa requirement for three months.

Previously, South Africa deported 10 000 illegal Zimbabweans a day, severely straining its immigration services and opening the door for corruption, from the South African Embassy in Harare to immigration ports of entry and Home Affairs offices across South Africa.

The South African move has been seen by analysts as an acknowledgement of the situations which many Zimbabweans find themselves in. With no end in sight to the economic and political crisis in Zimbabwe, many people will continue to cross the border to seek relief. An estimated 2 to 3-million Zimbabweans have already made South Africa their home.

Once one of Africa’s most prosperous nations with a superb educational system, Zimbabwe has spiraled into economic ruin since 2000 when President Robert Mugabe embarked on a land redistribution campaign that ground the economy to a halt. Currently, 70% of Zimbabweans rely on food aid, according to the International Monetary Fund, and battle with skyrocketing inflation and unemployment.

The full impact of the new visa policy would not be known for months, but there has been an influx of newcomers at border crossings such as Beitbridge in Limpopo province. There have been reports of Beitbridge crossings surging from 3 000 to 7 000 daily.

A Gauteng High Court ruled on 19 May 2009, that an immigrants’ centre near Musina, close to the Zimbabwe border, should be shut down due to overcrowding and unsanitary conditions. The centre was used to accommodate undocumented foreigners, most of them Zimbabweans.

Up until the policy change, up to 8 000 Zimbabweans applied for asylum status in South Africa. Now, presumably, those people would no longer have to ask for asylum and would be free to cross the border whether to shop for scarce goods or to seek temporary employment.

In South Africa, where the official unemployment figure stands at 34%, the issue of African immigrants fighting for resources is an explosive issue. Resentment against African immigrants and xenophobia erupted into violence last year, leading to the death of at least 62 people.

However, the country’s major labour union, the Congress of South African Trade Unions (Cosatu), has been muted in its response to the new policy. Patrick Craven, a Cosatu spokesperson, said the union was pleased by the fact that newly legitimatised Zimbabweans would not be exploited by employers who pay them less than South Africans.

“Cosatu has not taken a position on this action,” said Craven. “But in principle we are not opposed to granting legal status to Zimbabwean workers here because it stops their exploitation by unscrupulous employers and protects South African workers as well.”

In future, the Zimbabwean departure permit, or border pass, will be accepted as a legitimate travel document, according to Mapisa-Nqakula. She added that the visa move was an effort to help rebuild the Zimbabwean economy.

However, the Democratic Alliance (DA), the official opposition party, said that it was concerned about the new policy.

“While the DA is not opposed in principle to the 90-day visa-waiver for Zimbabweans, we believe this policy decision has been taken without proper plans to ensure its smooth implementation,” the DA said in a statement.

Lawyers for Human Rights, an advocacy group in Johannesburg, welcomed the new policy, noting that Zimbabweans faced unnecessary and extreme hardship in traveling to South Africa.

“This usually entailed dangerous and difficult travel via the porous border where migrants were at the mercy of smugglers, wild animals and environmental hazards,” the group said in a statement.