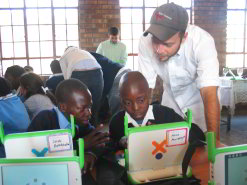 Many African pupils will get their first
glimpse of a computer when they receive
their OLPC XO laptop. 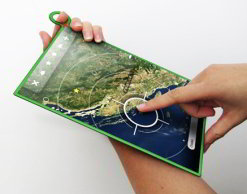 The upcoming OLPC XO-3 model is designed
with full touch screen technology that will
allow more than one pupil at a time to
use the device.
(Images: OLPC)

The image seems to come straight out of a science fiction novel; a class of 50 pupils with no teacher in sight, each being taught by their very own laptop on their desk.

This utopian vision could be a reality in the near future as the African Union (AU) and the One Laptop per Child (OLPC) organisation signed a memorandum of understanding in February 2011 that’s aimed at providing primary school children across Africa with laptops.

OLPC’s vice president of global advocacy Matthew Keller and Lidet Tilahun,vice president of the organisation’s international outreach, met with members of the AU at the union’s headquarters in Addis Ababa, Ethiopia, to confirm their commitment to the two-year deal.

Keller said that the partnership is yet another significant step toward ensuring children around the world have access to world-class education. He believes the AU is dedicating itself to a world where children become the agents of change.

The AU commissioner for science and technology, Jean-Pierre Ezin, said the laptop could change the way the current generation of African children think and learn.

However, to distribute the devices, the AU would need to the help of various institutions around the continent.

“This is a very ambitious project for which we will have to partner with various people and institutions to mobilise and find the resources required to meet the objective of educational transformation.”

Pupils in Africa will receive the popular XO laptops, formerly known as the $100 laptop, which functions solely as an educational tool.

According to Thulani Madondo, the executive director of the Kliptown Youth Program (KYP) in Soweto, the laptops’ arrival in Africa will help bridge the digital divide between the continent and other developing and developed countries.

Madondo has visited both the US and China and learnt that children in Africa are lagging behind pupils in those countries.

“I realise the gap between advantaged and disadvantaged communities is very big. About 90% of children in Soweto have not seen a laptop and some only learn to use a computer in the later stages of their life,” he said.

He believes that exposure to the laptop will improve children’s competency and prepare them well for the future.

“The children in Soweto who are using the laptop are learning how to type and use programs. Some of them are better at using computers than high school pupils,” he said.

The device has received criticism for the impact it has on the environment. However, Madondo said children in Soweto charge the devices using solar power, while generators are used as a backup.

He could not confirm whether the South African government has shown interest in the AU project.

OLPC was established in 2005 by current chairman Nicholas Negroponte, the founder of Wired Magazine, as a non-profit organisation. The project was then launched in the same year at the World Economic Forum in Davos, Switzerland. It aimed to provide free laptops to children in developing countries who otherwise do not have access to the technologies found in developed nations.

Later that year, the UN Development Programme announced that it supported the laptop and that they would work with OLPC in fulfilling its goals.

In Africa, governments have been active in distributing the laptops to their children long before the AU deal was approved.

The main beneficiaries so far are Ethiopia, who has received 5 000 units, and Rwanda, whose government distributed 55 000 up to December last year. Ghana has ordered 10 000 of the machines while Sierra Leone is also awaiting 5 000 laptops.

Since its inception in 2006, OLPC has distributed approximately 1.85-million laptops worldwide.

South America has taken the bulk of these deliveries, with almost 1.3-million laptops distributed amongst four countries. The continent’s first major request for the product came from Uruguay in 2007, when 100 000 units were shipped there. In just over three years, OLPC has distributed more than 400 000 laptops to the South American nation. However, Peru is the OLPC’s biggest customer, having ordered a total of 870 000 laptops up to December 2010.

The organisation distributes the OLPC XO model laptop which is manufactured by Quanta Computer in Taiwan. The laptop is specifically produced for the purposes of learning. Unlike traditional laptops, whose software is based on applications, the XO’s software is centred on activities for pupils.

It runs on the Linux-based Fedora operating system and uses the Sugar open source desktop environment. Sugar was specially developed for OLPC by Sugar Labs, and uses a journalling programme, which automatically saves a pupil’s activities.

The low-power machine uses flash memory instead of a hard drive to store information. This means information can be electrically erased and reprogrammed.

The OLPC foundation is looking to distribute the new XO-3 range, a touchscreen tablet in the same vein of Apple’s popular and successful iPad.

The plastic tablet is flexible and durable, with a full touch keyboard and a back face camera.

According to the OLPC website, the screen has both transmissive and reflective modes so that it could be used indoors or outdoors. It also has a multi-touch function so that more than one child may use it at the same time.

The XO-3, which is designed by Yves Behar’s Fuseproject, remains in the concept phase and will only be available next year for approximately $75 (R518).