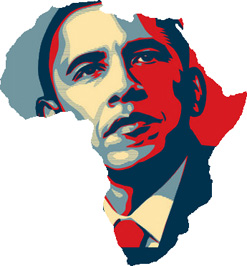 The African continent has hailed Barack
Obama’s triumph in the US presidential
election, and hopes that it will carry positive
implications for US-Africa relations. 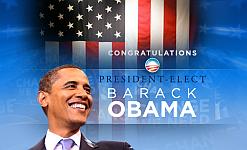 Barack Obama has not only won himself a place in the White House at the end of his brilliant campaign. He has also won the hearts of the people of Africa, not only because he has roots deep in the continent, but also with his charisma, humility and vision. Now, having won handsomely in the race for the US presidency – the most powerful political position in the world – people all over Africa are rejoicing.

In the US reactions are mixed, depending on who you were supporting, and some Republicans have even expressed fear of the future. However, in Africa there has been an overwhelmingly positive reaction to President-elect Obama’s triumph, and widespread praise for the brave choice made by the American people.

Obama will be sworn into office on 20 January 2009 as America’s first African-American president.

There was a buzz of excitement in Kenya just before American voters went to the polls, in expectation of a victory for the Hawaiian-born senator, now based in Chicago, Illinois.

Obama’s American mother and Kenyan father divorced when the child was just two years old. His father, Barack Hussein Obama Sr, returned to Africa and only saw his son one more time before his death in a car accident in 1982. However, this has not deterred Kenyans from embracing Obama Jr as one of their own, and taking great pride in his achievements.

“The US is a friend of Kenya and an Obama presidency will strengthen our friendship,” said Minister of Foreign Affairs Moses Wetangula in a statement. “I have no doubt that first and foremost he will be an American president, but there are still discretional decisions that would be of benefit to countries like Kenya.”

A number of Kenyan leaders and businessmen have also expressed the hope that Obama’s victory will significantly raise the profile of the African country, generating positive publicity and leading to a rise in tourism. At the upcoming World Travel Market, which takes place in mid-November in London, the country’s tourism ministry is seizing the chance to showcase it as a desired tourist destination, using the US election as leverage.

Meanwhile, the media have flocked to Obama’s ancestral home in Kogelo, West Kenya, where his relatives have been inundated with requests for interviews and comments and have resorted to avoiding all contact with the press until they are ready to release an official statement.

Reports say that people in the village are singing and dancing with joy. People are showing their jubilation in unusual ways – someone was spotted wearing a top hat of immense size made entirely of newspaper clippings of Obama’s picture.

The atmosphere in the province of Kisimu, where Kogelo is located, is reported to be approaching that of a carnival.

Kenyan President Mwai Kibaki has declared a national holiday to let Kenyans celebrate the historic achievement of one they view as a native son.

The Democratic Party has long been perceived as a friend of minority groups and has traditionally received great support from these groups with its progressive attitude towards civil rights. Consequently it is more accountable to minority voters and representatives in pursuing its political agenda. The likes of Democratic presidents John Kennedy, Lyndon B. Johnson, Jimmy Carter, and Bill Clinton all upheld the principle of civil rights during their terms of office.

But some African politicians remain wary of the general conservatism of the American government’s policies, and analysts have cautioned against getting too carried away and viewing Obama as the saviour of Africa, as he will be constrained by the demands of his office.

However, on the whole they welcome the inevitable change in foreign policy that the Obama victory heralds, and expect that the President-elect will be more willing to listen to the voices of those who live in the Third World.

South African interim President Kgalema Motlanthe has congratulated Obama on his victory, saying, “The government and people of South Africa and indeed those of the entire region … join the peoples of the United States of America in expressing their warm congratulations to you.”

South Africa’s leader went on to say that Obama’s election signals the start of new hope for millions of Kenyans and Africans, both on the continent and in the Diaspora.

Elsewhere on the continent, support for Obama and the Democratic Party has been glaringly obvious, and more so now that the race for the White House is over. In Cameroon the majority of people polled were in favour of Obama as president, and hoped that he would help to raise ethnic pride amongst black people.

Ugandans are reported to have received the historic news with great enthusiasm. In the village of Rwanyampazi in south-western Uganda, a woman has named a Friesland cow after the newly elected president. Her reasoning behind this decision was because she likes the cow so much. Her brother, meanwhile, has named his child after Obama. “My whole family is crazy about him,” said the woman, speaking to the Mail & Guardian.

Over to the west, Ghanaians too are completely swept up in Obama fever. Not content with merely supporting the candidates for their own elections – the country is also in a presidential election year – they display posters of Barack Obama in their shops or wear badges bearing his likeness or logo on their clothes and accessories. “He is my Mandela of today,” said a trader in Accra.

Ghanaian newspapers found the story of Obama visiting his 86-year-old paternal grandmother just as newsworthy as the latest regarding elections in that country – more so, in fact, because a South Africa-based Ghanaian journalist found stories of election-related events in his home country much harder to find. Obama’s maternal grandmother Madelyn Dunham died on the eve of the election, but had already mailed her vote, which was later counted by Hawaiian electoral officials.

And a 2007 reggae song titled “Obama” took the country by storm and held onto the top spot on local music charts for two weeks. The song has also gone on to be lucrative for its composer in terms of worldwide sales.

Congolese are a little more cautious, according to reports, and are not sure how effective Obama will be in terms of US involvement in Africa, as changes to these policies are believed to be beyond the reach of a single person, no matter powerful he is.

In Nigeria residents have taken up Obama’s winning message of change, with “Change we believe in” t-shirts, coffee mugs and bumper stickers adorning both animate and inanimate objects. According to a Nigerian journalist the people are celebrating Obama’s victory as if he was a son of Nigeria.

All of this points to an Africa that is crying out for more recognition and aid from the most powerful country in the world. Although outgoing President George W. Bush has implemented a number of acclaimed Aids and HIV programmes and his stewardship saw the passing of the African Growth and Opportunities Act, which allows African countries to export selected good into the US tariff-free, more is needed.