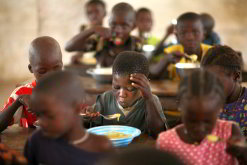 Earlier in April a group of international academic institutions and an EU-backed NGO launched Sustainable Nutrition Research for Africa in the Years to come, or Sunray, to develop a nutrition agenda for Africa, with specific emphasis on the 34 sub-Saharan countries.

“We want to make sure nutrition interventions in the next 10-15 years – when Africa faces potential environmental changes which will impact on nutrition – are sustainable, driven by African countries, and their priorities are not pre-defined by donors,” said researcher Carl Lachat of the Belgium-based Institute for Tropical Medicine, one of the participating institutions.

A recent study by the International Food Policy Research Institute, a US-based think-tank, found that in another two decades the effect of climate change on food production could drive child malnutrition up by 20%.

The two-year Sunray project has invited proposals for working papers from African researchers on a number of relevant topics.

They include the relationship between nutrition and climate change; the influence of rising food prices; the future availability of water; social dynamics in households, and the effect of rapid urbanisation, among other themes in order to identify the specific research needs for nutrition in these areas.

Proposals for working papers are under review by academics at four universities in sub-Saharan Africa: North-West University in South Africa; Sokoine University in Tanzania; the University of Abomey-Calavi in Benin; and Makerere University in Uganda.

“South Africa plays in a different league in terms of research when compared to the rest of Africa, but our research is more influenced by Western concepts, so if you are to look at good home-grown research pertaining to local foodstuffs, Nigeria and Kenya are a lot more advanced,” said Prof Annamarie Kruger, director of the Africa Unit for Transdisciplinary Health Research at North-West University’s Potchefstroom campus.

Kruger added that the project gave African researchers the attractive opportunity to develop interventions suited for their own conditions, meaning that they would have a say in the agenda.

“We also know the gaps that need to be addressed,” she said. “It is not like we are doing research for European driven projects.”

Lachat pointed out that the backing of the EU meant rich countries are calling for African involvement in setting the priorities for nutrition research and funding.

With the deadline for proposals just passed, the universities are now assessing the submissions. The first of a series of workshops with the authors will take place later in 2011.

Lachat said they realised that political backing was critical to ensure the research made the journey from paper to the real world, so “we are involving African political leaders in the initiative.”

The project will produce a roadmap document summarising research priorities, strengths and gaps, resource requirements, opportunities for linkage and support between African and Northern institutions, or synergies between existing initiatives and research in other sectors.

Only nine of the 46 countries in sub-Saharan Africa are on track to achieve the UN Millennium Development Goal to eradicate extreme poverty and hunger by 2015.

Pupils eat food donated by WFP in a classroom in Eva Orango school in Orango Island of Bijago Archipelago in Guinea-Bissau Feburary 2008. According to World Food Program (WFP) intellectual levels rise when children are fed properly.