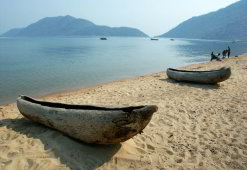 The lake supports fishing communities
as well as birds, animals and fish. 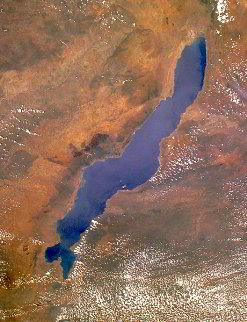 The vast expanse of Lake Niassa as
viewed from space.
(Image: Wikimedia COmmons)

Lake Niassa in Mozambique is now a protected area. That country’s government proclaimed the Mozambican portion of the lake a reserve in June 2011, making it the first protected freshwater lake in Mozambique.

The new Mozambican reserve, which covers about 47 800ha and has a surrounding buffer zone of 89 300ha, has also received the green light for authorities to begin registration of the area as the country’s second Ramsar site.

Mozambique is one of 160 parties to the international Ramsar Convention, which protects and preserves important wetland areas, especially in terms of waterfowl habitat. The convention is named after the Iranian town of Ramsar, where it was adopted at an international meeting held there in 1971.

The country’s first Ramsar site is the Marromeu Complex in the centrally located Zambezi Delta, which empties into the Indian Ocean. Marromeu was designated a Ramsar site in 2004.

The inclusion of Lake Niassa will bring the country’s total surface area conserved under this convention to 2 051 700ha.

Lake Niassa shares borders with Mozambique, Tanzania – where it’s known as Lake Nyasa – and Malawi, where the locals refer to it by its other familiar name, Lake Malawi.

Residents of the region also call it the Calendar Lake because it’s roughly 365 miles long and 52 miles wide (about 570km long and 75km wide).

The lake, which covers an area of about 2 960 000ha and can be as deep as 700m in places, is the southernmost of the seven in the East African Rift system, and is the continent’s third largest lake.

Protecting this unique ecosystem will open the way for plans to develop and expand tourism in northern Mozambique. Attractions for the interested visitor include diving, bird watching, and adventure trails. Lake Niassa is also renowned for its game fishing.

The lake’s tropical waters support the world’s last remaining freshwater corals, and are also home to more than 1 000 species of cichlid fishes – a large group which includes the freshwater angelfish and other familiar types – many of which are endemic to the lake.

Niassa’s shores support not only animals and birds, but also human communities, who make a living from fishing, agriculture, farming, hunting, tourism, and trade in handicrafts.

These local communities played an important role in the collaboration with the Mozambican government and its partners – the Coca Cola Company, the World Wide Fund for Nature and USAid – in setting up the structures for monitoring, managing and protecting the flora, fauna and environment.

From now on the partner organisations will keep a close eye on potential threats such as illegal fishing, overfishing, erosion and deforestation, and the impact of climate change.

Communities agreed that at certain times of the year, rivers could be totally closed off to allow fish to spawn. They also volunteered for duty as rangers, reporting to the district administration, to work together with authorities to enforce environmental laws.

Because communities are dependent on fishing for survival, as are birds and animals, it is hoped that this innovative approach to the management of water usage will immediately begin to benefit the entire region. With the fisheries under protection, the livelihoods of communities will become sustainable.