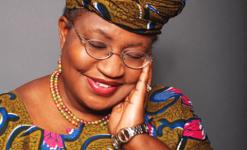 Nigerian finance minister Ngozi Okonjo-Iweala is one of three candidates in the running for the position of the next World Bank chief.

South Africa’s minister of finance Pravin Gordhan made the announcement in Pretoria on 23 March, the day nominations for the top post of the Washington-based body drew to a close.

“As Africa, we are very proud,” said Gordhan, “and certainly also as this constituency, to confirm that the minister of finance of Nigeria is going to be a candidate for the presidency of the World Bank.”

Gordhan was speaking ahead of a constituency meeting of the World Bank between South Africa, Angolan planning minister Ana Dias Lourenco, and Okonjo-Iweala of Nigeria.

Okonjo-Iweala is serving a second term as finance minister and between 2007 and 2011 sat on the board of directors at the World Bank.

Gordhan described her as being “very experienced”.

“We believe that the candidature of Minister Okonjo-Iweala enables those that are going to make this decision in Washington to have before them an eminently qualified individual, who can balance the needs of both developed and importantly, developing countries; [and] also provide a new vision and sense of mission to the World Bank and its relevance, particularly to developing countries across the globe,” he said.

Gordhan added that Okonjo-Iweala, a Harvard and MIT graduate, would be a candidate of choice not just on the African continent but well beyond as well.

The World Bank is expected to choose its next leader before the next meeting in late April. Its current president Robert Zoellick announced in February that he will step down at the end of June.

The other candidates for the top position are Jim Yong Kim from the US and Colombia’s Jose Antonio Ocampo.

Okonjo-Iweala said she hoped the selection process she faces will be merit based and that those nominated apply their best minds in the interviewing processes.

“I hope that the best candidates come forward. I consider the World Bank [as] a very important institution for the world, particularly developing countries deserving of the best leadership,” she said, adding that she looked forward to the contest.

“Am I confident? Absolutely.”

She further noted that it would be premature for her to lay out her vision for the World Bank.

Ngozi Okonjo-Iweala stepped into the position of Nigeria’s finance minister in July 2011. Before this she was the MD of the World Bank for almost four years, and was the minister of finance and the foreign minister in her home country between 2003 and 2006.

Okonjo-Iweala was the first woman to hold either of those positions.

The constituency meeting between South Africa, Nigeria and Angola forms part of the world body’s three sub-Saharan constituencies out of a total of 25 constituencies.

Among some of the issues discussed are the World Bank itself, the kinds of programmes with which it is involved and the extent of the programmes that relate to food and fuel crises, as well as the issue of the bank’s sustainable development and modernisation.

“We’ve been reflecting on how some of these programmes relate to our countries and the continent more broadly and how we could encourage the World Bank to find ways of becoming more relevant to promoting development on the African continent,” said Gordhan.

South Africa and Angola have committed themselves to mobilise support for the Nigerian minister through the various bodies to which they belong on the continent.

The countries will garner support for her candidature at next week’s meeting of the continent’s finance ministers in Addis Ababa, as well as at the BRICS summit where South Africa will encourage members to support her candidacy.