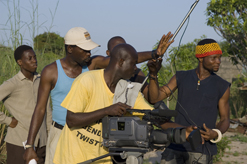 Director Bond Emeruwa and crew shoot
a scene for the film This Is Nollywood, a
Nigerian documentary about the country’s
multimillion-dollar film industry.

Nigeria’s film industry, the second largest in the world after Bollywood, is about to be taken to another level with the building of an ultra-modern film studio and entertainment complex with a Disneyland-style theme park.

Because Nollywood – the popular nickname for Nigeria’s film industry – is often criticised for poor production standards and sub-standard acting, the proposed new development aims to shake things up and turn the country into a world-class filming destination.

According to the Abuja Film Village International (AFVI), the company in charge of the project, the development plans to provide a place where local and international filmmakers can flock for pre-production planning, production, post-production and the premiering of their films.

Although still in the early stages of planning, developers envision the project to also offer retail and residential areas along with the elaborate theme park.

The film village is the dream of AFVI managing director Segun Oyekunle, who lived and worked in Los Angeles, US, for almost 30 years and relishes the idea of a Nigerian Disneyland. “We want to provide state-of-the-art infrastructure for film, music, television, as well as a theme park,” he said.

The project will be financed by the administration body overseeing Abuja, local developers, as well as Nigerian and international investors.

AFVI has teamed up with the Landmark Entertainment Group, which has overseen a range of impressive entertainment-based real estate developments across the world, including theme parks for Universal Studios and design work for many Las Vegas casinos.

The development will also boast environmental friendliness, with part of the village running on solar and hydro-electric power.

Landmark president Tony Christopher is upbeat about the plans. “A few reasons to put the project here in Abuja [as opposed to Lagos or other locations in Nigeria] would be based on the large land site, the fact that Abuja is a tourist-friendly city, as well as the need to develop the capital into an entertainment and cultural destination,” he said.

“In my opinion Nigeria needs to offer more support to the creative people making films. They need education, more professional facilities, and the infrastructure to build the talent pool in the country. This is exactly why the Abuja Film Village is being created at this time … it will allow more opportunities for Nigeria to compete with films internationally.”

In addition, the AFVI plans to run workshops in all areas of filmmaking before construction of the village actually starts.

Oyekunle says that, “50% of our vision is geared towards improving and developing Nollywood but we also aim to provide equipment such as cameras and editing suites on a rental basis, or even take a stake in certain projects – this is strictly business you know”.

Besides providing film-production and entertainment facilities, AFVI will also produce its own films with the first one called Seeds of Nationhood: The Sokoto Caliphate Story. Before colonisation, Sokoto Caliphate was one of the most powerful Islamic empires in sub-Saharan Africa.

With a mainstream Hollywood production costing as much as US$100-million (R811-million) to produce, Oyekunle says the Abuja village will offer a more cost-effective filming location.

“We aim to provide a modern alternative and hope they will seriously consider producing their films in Abuja … we want to stop films that are set in Nigeria or elsewhere in Africa – such as Tears of the Sun – being produced in Hawaii.”

The Nigerian film industry emerged in the late 1970s amid the country’s crumbling economy. Due to many financial obstacles, public funding of movies and original television programming collapsed, and spiralling crime made cinemas too dangerous to visit.

European and American shows soon dominated television, but the absence of an African flavour irked the country’s fledgling filmmakers, who soon began screening vibrant tribal productions. By the early 1990s filming on celluloid became too expensive and production shifted to video.

Traditionally Nigeria’s movie videos are shot on location throughout Nigeria with hotels, homes and offices often being rented out by their owners for filming purposes. The most popular film locations are currently Lagos, Enugu and Abuja. Most of the movies are in English, allowing for the widest-possible reach.

The quick turnaround in making a Nollywood movie allows directors and producers to make films with plotlines that reflect the ever-changing political and cultural climate, and often include aspects of current events. Storylines revolve around corruption, prostitution, folklore, HIV/Aids, romance or slavery and civil wars.