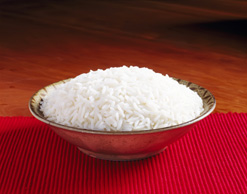 For the 240-million people in West Africa
who rely on rice as their primary source
of energy and protein, Nerica rice will
increase both food security and economic
development in the region. 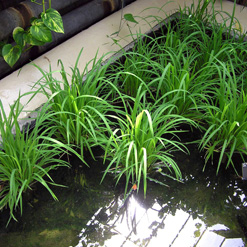 Nerica is able to smother weeds, is
drought-resistant, produces a yield two to
three times that of either African or Asian
rice, and can thrive in poor soil.
(Images: West Africa Rice Development
Association)

West African farmers are keyed up about a new strain of rice that is outperforming indigenous and Asian varieties in the region. Known as New Rice for Africa, or Nerica, the cultivar was developed by the West Africa Rice Development Association (Warda) to improve the yield of native African rice.

Cultivated for some 3 500 years, African rice (Oryza glaberrima) is hardy and rugged. It is resistant to disease and pests such as African rice gall midge, rice yellow mottle virus and blast disease. But its yield is poor and the slash-and-burn system used by farmers every two or three crop cycles to rid the fields of the pests degrades the environment.

Asian rice (Oryza sativa), introduced into Africa by Portuguese sailors about 450 years ago, has high yields but needs abundant water to grow. Its smaller plants are easily overwhelmed by weeds, and susceptible to African diseases and pests.

Nerica is a hybrid of African and Asian rice, developed by scientists to combine the best characteristics of the two very different varieties. It matures quickly, produces a higher yield, and is resistant to drought. The rice promises to boost domestic production, helping to cut down on the annual importation of about 3.5-million tons of rice which, according to the United Nations, costs nearly US$1-billion – a hefty price tag for developing African nations.

For the 240-million people in West Africa who rely on rice as their primary source of energy and protein, Nerica rice will increase both food security and economic development in the region.

“It will mean more food on each household’s table and more money in the farmers’ pockets,” said Warda director-general Kanayo Nwanze. “This will in turn contribute to food security and poverty reduction.”

According to the United Nations, the plant’s potential has also been recognised by the New Partnership for Africa’s Development (Nepad). The Nepad Steering Committee has given the green light not only to its increased use in West and Central Africa, but also to its introduction in East and Southern Africa. Prof Richard Mkandawire, Nepad’s agriculture advisor, said Nerica can help to fast-track the process of eliminating hunger and famine in the African continent.

The Nerica project took seed in 1991, when a biotechnology programme was initiated to produce a hybrid that combined the best traits of Asian and African rice. Because the two species do not interbreed naturally, the embryo rescue technique was used. This is a plant tissue culture technique where an embryo resulting from a hybridisation and which has been fertilised but has not developed is cultured in vitro.

Scientists say that the new variety displays a high level of heterosis or hybrid vigour, where the offspring of two genetically different parents are superior to both parents in characteristics such as growth rate, yield, or resistance to stress. Nerica is able to smother weeds, is drought-resistant, produces a yield two to three times that of either African or Asian rice, and can thrive in poor soil. It also matures 30 to 50 days earlier than traditional rice varieties, earning farmers an income in a shorter time. They can also plant other crops in the time saved.

Finally, there is at least 2% more protein in Nerica than in either the African or Asian varieties. A grain of Nerica contains up to 12% protein, compared to about 10% in its parents.

“It is a miracle crop,” said Nwanze.