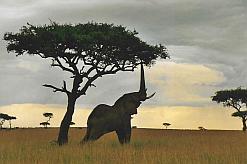 The African elephant is found in greater
numbers in Southern Africa than anywhere
else on the continent.
(Image: Wikimedia) 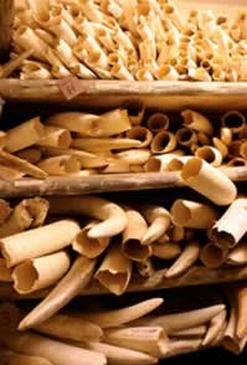 The first ivory auction in Southern Africa in a decade took place in October 2008 in Namibia, with the intention of raising funds for conservation. The United Nations-backed Convention on International Trade in Endangered Species (Cites) granted permission in 2007 for four auctions to take place in Southern Africa in 2008.

Cites banned international trade in ivory in 1989 and placed the African elephant (Loxodonta africana) on its Appendix I, which lists critically endangered species or those that are and may be affected by trade. This resolution banned trade in elephants, as well as any product derived from the magnificent beasts, including ivory.

In recent years, parties to the Cites convention – that is, countries that have agreed to abide by it – have shown increased willingness to allow for trade in products from well-managed animal populations. In 1997 Cites moved the African elephant to Appendix II, which lists species that are not necessarily threatened but may become endangered unless their trade is controlled by strict regulations.

Under the new listing Cites allowed Botswana, Zimbabwe and Namibia to make a one-off sale of 50 tons of ivory to Japan, the only country which met the requirements for import at the time. The organisation based its decision on recognition that elephant populations in the region were indeed healthy and well managed. That auction took place in 1999 and brought in a bounty of R51-million ($5-million).

Towards conservation of elephants

The 2008 auction took place behind closed doors and under the strict control of Cites, bringing in R12.2-million ($1.2-million). There were 9 metric tons under the hammer but at the end of the day only 7.2 tons had been moved. The remainder, said Namibia’s deputy environment minister Leon Jooste, was of a lesser quality and will be used by jewellers and carvers in local communities.

Proceeds will go to the Game Product Trust Fund created by the Namibian Ministry of Environment and Tourism in 1999 to promote conservation in communities where elephants occur. Namibia’s elephants are found mostly outside dedicated reserve areas and as in many other parts of Africa, have to compete with people for resources.

Ivory sales in South Africa, Botswana and Zimbabwe will follow within the next two weeks. The total amounts on offer are 44 kg from Botswana; 9 kg from Namibia; 51 kg from South Africa; and 4 kg from Zimbabwe. However, the four countries will have to wait another nine years before being allowed to sell ivory again.

The ivory stockpiles were obtained from culling, problem animal control, or from animals that died of natural causes. Southern Africa is home to 58% of the continent’s elephants, with over 300 000 individuals roaming the plains here. Countries in the region have been remarkably successful in their elephant conservation efforts – so much so that the huge mammals are rapidly increasing in number. The population in South Africa alone, which currently stands at about 18 000, is expected to double by 2020. Botswana has 165 000 elephants, more than any other country.

While conservation was the main aim, the ivory auction was not without its controversy. A number of environmentalists opposed the event and some fear it will lead to a greater demand for the precious material and more elephant poaching and ivory smuggling.

The buyers, China and Japan, also had to meet with stringent requirements in order to make their purchases. They are not allowed to export the ivory and any money raised from its sale must go to elephant conservation projects and community development programmes in the exporting countries. The two buyers will be closely monitored by Cites to ensure that they do not sell poached ivory under cover of the sale of the legal shipment.

The week before the event, online auction house eBay banned the sale of ivory on all its 39 global sites after evidence was uncovered by the International Fund for Animal Welfare that the site is facilitating illegal trade in wildlife products. A three-month investigation, conducted in 11 countries by the conservation body, showed that 73% of illegal wildlife offerings on US web sites were found on eBay.

The International Fund for Animal Welfare stated in its report that abuses in virtual or online markets arise mostly from weak or no enforcement, which allows unscrupulous sellers to get a foot in the door.

The 2004 paper The ivory trade and elephant conservation, published in the Environmental Conservation journal by anthropologist Daniel Stiles, affirmed that no evidence exists to support activists’ claims that the 1999 ivory auctions stimulated ivory demand or elephant poaching. This statement is backed by Cites Secretary-General Willem Wijnstekers, who monitored the latest auction.

“There is no proven scientific explanation that ivory sales lead to poaching,” said Wijnstekers in an interview with The Associated Press.

And his sentiment is echoed by Traffic, an organisation that monitors wildlife trade, which also has not found evidence of a link between the 1999 sale and illegal trading. Traffic was founded by the World Wide Fund For Nature (formerly the World Wildlife Fund and known by that name only in North America) and the International Union for the Conservation of Nature.

Furthermore, Traffic says that analysis of its Elephant Trade Information System, a statistical database that provides information on seized elephant products, strongly indicated an overall drop in the illegal ivory trade in the five years after the sale.

The World Wide Fund for Nature says that a more long-term threat to the elephant is the shrinking of their habitat because of expanding human populations.

This year’s International Elephant Conservation and Research Symposium will take place in Thailand and will focus on this issue, as well as the research and conservation needs of captive and wild populations of elephants worldwide.

In an August 2008 article in Nairobi newspaper The East African, Stiles describes how he, together with Esmond Martin, a wildlife trade expert living in Kenya, conducted covert investigations in over 30 key ivory countries in Africa, Asia, Europe and the US in 1999.

The investigation aimed to establish whether or not the 1999 ivory auction could be linked to increased elephant poaching, and took place under the under the auspices of Save the Elephants, which opposes the sale of stockpiles.

Their findings showed that the 1989 Cites ban in ivory trade had a significant effect in reducing ivory use, and that ivory demand at the time was at a standstill or declining in Western Europe, the US and Japan.

The two investigators did note an increase in ivory activity in certain Asian and African counties. They interviewed ivory carvers, dealers and vendors around the world and they concluded that the 1999 ivory auctions, which were common knowledge years in advance, were irrelevant to the greater demand in certain countries.

Rather, they attributed the increase to stronger economies in Asia as well as increasing poverty in elephant countries. The real cause of increased elephant poaching, they said, was the existence of legal domestic ivory markets without a corresponding legal raw ivory sales mechanism to supply those markets.

Stiles has postulated that enlistment and licensing of only master ivory carvers could effectively cut down on illegal poaching of elephants. These craftsmen would ensure that their ivory comes from a legitimate source, and the mass market tourist trade could be serviced by trinkets made from wood or bone.

“Raw ivory must pass through the hands of a carver to give it economic and aesthetic value,” he said. “The workshop is therefore the node for the movement of all ivory, whether legal or illegal. It would be much easier to police the carvers than the smugglers, or even retail shops, of which there are hundreds or possibly thousands.”