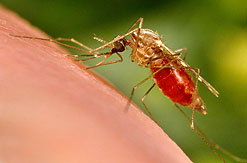 A new species of the Anopheles mosquito
may or may not be a carrier of malaria.
(Image: University of Notre Dame)

South African scientists have discovered a new species of mosquito in Malawi, and the challenge now is to determine whether it poses a heath threat or not.

The new insect is a member of the Anopheles genus. Out of the roughly 140 Anopheles species found in Africa, just seven are carriers of the deadly malaria parasite, Plasmodium spp. This tiny organism plagues communities throughout most of Africa. The most deadly strain is P. falciparum.

A multi-national group, including scientists from Johannesburg’s Witwatersrand University (Wits) and Malawi’s national malaria control programme, has written a report on the insect, titled A New Species Concealed by Anopheles funestus Giles, a Major Malaria Vector in Africa.

The paper appears in the September 2009 issue of the journal of the American Society of Tropical Medicine and Hygiene.

A team comprising researchers and students from Wits University, working with the Johannesburg-based National Institute for Communicable Diseases (NICD), made the discovery while on a field trip in northern Malawi. Many specimens were found around the rural villages near the former British trading post of Karonga on Lake Malawi’s western shore.

The team was guided by medical entomologists Professor Maureen Coetzee, an award-winning scientist, and her husband Dr Richard Hunt.

The new species is related to Anopheles funestus, which belongs to a complex of nine African species so similar physically that differences can only be discerned at the chromosomal and molecular level. However, not all the group members are equally effective as malaria vectors.

An. funestus prefers to feed on humans rather than animals, and it also readily associates with humans and their environment – these two factors make it an extremely potent enemy, and one of Africa’s most efficient malaria carriers.

The new mosquito has been named Anopheles funestus-like. However, whether it is a malaria carrier or not will only become clear in early 2010, when Malawi’s rainy season is under way. If it is, it’s vital that strategies are put in place swiftly to prevent more deaths. If it’s not, it will be unnecessary to spend money trying to contain it.

However, the discovery could complicate existing malaria control efforts in Malawi. Since the new mosquito looks so much like the dangerous An. funestus, measures will have to be put into place to identify it before precious resources are wasted on trying to control it unnecessarily, should it prove to be harmless.

“If this mosquito is not a malaria vector, it is certainly a ‘confuser’ – looking exactly like one of the major vectors,” said Hunt.

It is the female mosquito that transmits the disease, as she needs a blood meal in order for her eggs to develop. A total of 63 females were put into vials to lay eggs. Hatchlings and surviving parents were scrutinised in the mosquito breeding facilities at the NICD while undergoing a range of genetic tests.

“We were able to show that the mosquitoes from Malawi were not the same as An. funestus and that we were dealing with a species new to science,” said Coetzee.

Although the new mosquito is commonly found in homes, none of the laboratory specimens examined showed any trace of P. falciparum.

Still much to learn

The test results, added Coetzee, show how little scientists know about malaria carriers in Africa, even after more than a century of studying them. Anopheles was first identified as the deadly parasite carrier by Nobel physiology and medicine laureate Sir Ronald Ross, while doing research in 1897 in India.

Africa is still an entomology treasure trove waiting to be explored and according to Coetzee, there are large blank spots on the mosquito species distribution map.

Malaria remains one of Africa’s killers, although the disease is entirely preventable with strategies such as indoor spraying and bed nets.

About 3.3-billion people – or half the entire global population – live with the risk of contracting malaria. Around 1-million people succumb every year, according to the World Health Organisation’s 2008 world malaria report. Children and pregnant women are particularly vulnerable: a child under the age of five is killed by malaria every 30 seconds.

Most of the victims live in sub-Saharan Africa, which carries a tremendous social and economic burden as a result. Malaria keeps people away from work and children out of schools, and is estimated to cost Africa about US$12-billion (R92.6-billion) every year.

Under its Millennium Development Goals programme, the United Nations wants to completely halt the spread of malaria by 2015.