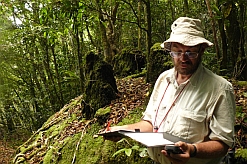 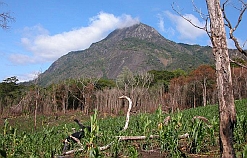 The pristine area must be protected
from deforestation. 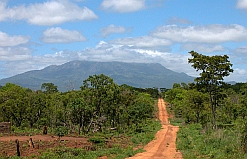 Mabu can only be approached along
this narrow road. 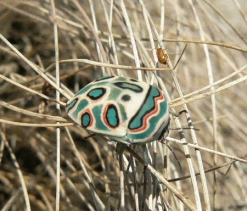 A colourful hemipteran insect, one of
the many fascinating living species found
in the Mabu forest. 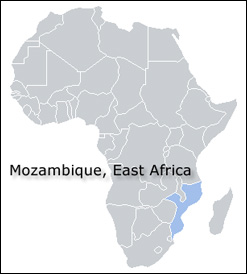 Africa is once again proving to be a gift to the natural world. Mount Mabu in Mozambique was an untouched paradise until a team of scientists explored it a few short months ago. The previously unmapped forest is a conservationist’s dream, and explorations to date have yielded rare species of birds, reptiles and insects, some of which are found nowhere else.

Scientists from the Royal Botanic Gardens at Kew in the UK recently led the first expedition to Mount Mabu in central Mozambique. The world-renowned botanical authority works with the Mozambican government, among others, to combat the threat of rapid development to sensitive areas by identifying priority areas for conservation.

The inaugural expedition was funded by the UK-based Darwin Initiative under its project titled Monitoring and Managing Biodiversity Loss in South-East Africa’s Montane Ecosystems. The Darwin Initiative assists biodiversity-rich countries that are financially hard-pressed to protect their natural treasures, by funding collaborative projects and making available UK biodiversity expertise.

Mount Mabu was discovered by Kew scientists during a Google Earth search for a suitable area for a conservation project above 1 600m, where higher rainfall would likely lead to the establishment of forests. The green area on the satellite image hinted at exciting discoveries to be made and the interested botanists wasted no time in making arrangements to get closer.

They contacted locally based conservationist Julian Bayliss, who investigated the unexpected patch of green. “To be the first biologist to enter such a huge area of untouched rainforest – well, it’s a dream come true for a field-based conservationist such as myself,” enthused Bayliss later.

The only road that led to the vicinity of the peak did not go close enough to reveal any more than dense forest on the slopes of the rock-topped mountain. Until an expedition could shed more light, scientists’ only resource was Google Earth’s satellite imagery, which gave them clues to the extent of the forest on the far side of the peak.

While it was later discovered that the inhabitants of the area knew about Mabu’s existence, it was not to be found on any map and only in December 2008 were scientists able to put together an expedition to seek their first glimpse of the natural treasure trove. Once on the ground in Mozambique, the team made their base camp in the forest. When they reached the end of the road they had to carry their equipment through the dense vegetation.

Expedition leader Jonathan Timberlake, a botanist with the Royal Botanic Garden, says Google Earth’s digital imagery has helped open up the world to the scientific community, and may reveal more untapped pockets of diversity, especially in areas like Mozambique or Papua New Guinea where not all the terrain has been explored.

“We cannot say we have discovered all the key biodiversity areas in the world,” commented Timberlake. “There are still new ones to discover, and the discovery of new species will help to underline the importance of conservation.”

The 28-member Kew team, comprising experts from the UK, Mozambique, Malawi, Tanzania, Belgium and Switzerland, was astounded by the diversity found in the 7 000ha Mabu forest. The ground beneath the canopy, which rises 45m into the air, was teeming with tropical vegetation, snakes, bugs, antelope, monkeys, elephant shrews, and much more.

A new privately-funded expedition is due to visit the area during May and June 2009.

Timberlake said that Kew and the Mozambican government are working together to protect areas like Mount Mabu and encourage the local inhabitants to value the forest not only because it is a resource that helps them in their daily lives, but because of its diversity of wildlife.

“By conserving the plant life we can help secure a future for all the other creatures we saw there,” he said.

It is vital to begin conservation efforts now, as the area is recovering from the civil war that raged between 1975 and 1992 and people are filtering back to their lands. The valuable forest was unscathed by the violence only because victims of the war used it as a refuge and therefore did not give away its location. However, as has happened in other areas of the continent, there is a danger of it shrinking as civilisation encroaches and trees are chopped for firewood or cleared for agriculture.

Five new species of butterfly, a new snake, several rare bird species, and a number of exotic plants including a rare orchid, are just a few of the riches discovered in the lush greenery. The bird species are all threatened and listed on the Red List of the International Union for Conservation of Nature.

One of them, the Namuli apalis (Apalis lynesi), is Mozambique’s only indigenous bird and has been seen in just one other location, the Namuli massif in the north of the country. Between its discovery in 1932 and rediscovery in 1998, there were no sightings of the rare creature.

With more than 500 plant species accompanying them back to the UK, the scientists at Kew are hard at work researching and cataloguing their finds.

Not only is the Mabu plant life under scrutiny, but the area’s significance to the bird world has prompted ornithologists from the Birdlife conservation organisation to push for its classification as an important bird area (IBA). Once an area is designated an IBA it is easier for Birdlife to push it up the priority list and obtain co-operation and protection from national and local organisations.

The Kew team is also working with local partners to build capacity so that the work may be continued in their absence.