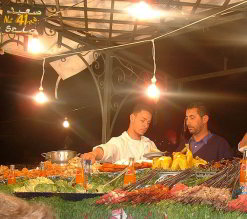 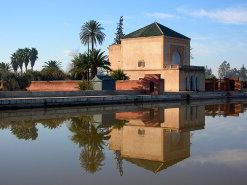 The tranquility of the Menara gardens
in Marrakech.
(Images: Wikimedia)

There’s a famous lyric from “Star Trekkin'”, the song that parodies cult film and TV series Star Trek, in which Mr Spock warns Captain James Kirk: “It’s life, Jim … but not as we know it.”

A few years ago, when I told a friend I would be travelling to Morocco he reminded me I shouldn’t expect that country to be at all similar to South Africa just because they are part of the same land mass. “It’s Africa, Jim,” he affirmed, “… but not as we know it.”

At the time, this seemed to me a rather inappropriate remark – certainly not in keeping with the pan-African sentiments that those of us who are citizens of African countries are encouraged to inculcate.

After spending some time in Morocco, however, I found that I had to agree with him. South Africa and Morocco are not only on opposite ends of the continent; as those who have visited or lived in both countries can attest, they often seem to be worlds apart.

This is, of course, as it should be. Essentialised notions of Africa, according to which African countries are seen as generic entities with more or less the same histories, cultural practices, world views and political structures (with, at best, scope for a little variation on the theme), are both inaccurate and dangerous. They reproduce precisely the kind of generalisation that facilitated the colonisation of the so-called dark continent.

On the other hand, precisely because colonialism brought about artificial national borders that did not take into account the clustering of different ethnic groups, cultures and tribes – which has resulted in countless instances of internecine conflict or civil war across the continent – it is perhaps appropriate to discuss characteristics of the various regions.

In particular, world history has shaped the countries to the north of the Sahara desert in ways that are distinct from sub-Saharan Africa. Morocco has been influenced as much by French, and more recently, Spanish incursions as by interaction with Arabic peoples of the eastern Mediterranean. Before that, there were the Romans and Phoenicians.

Throughout, the Berbers or imazighen have asserted their presence as the indigenous people of this northwest corner of Africa.

As a result of this rich and complex history, a country has been forged that is in some ways recognisably African – whatever that may mean – but that, to those of us from southern Africa, also feels enticingly exotic. And there is no place in Morocco more enticing than the all-singing, all-dancing, all-suffering, all-smiling, all-smelling, all-selling city of Marrakech.

Rabat is the capital of al-Magrib, the Kingdom of Morocco; Casablanca is its largest city, with a certain appeal to fans of the iconic 1942 film starring Humphrey Bogart and Ingrid Bergman; Fez has the renowned Fes el Bali, a remarkably well-preserved old town or medina.

But the Red City of Marrakech, right in the centre of the country, is the beating heart of Morocco.

I arrived there as a dusty late afternoon was turning to red-earth dusk. Looking out over a thousand rooftops, I surveyed a scene marked by haggard palm trees and crumbling sandstone towers. The smoke was rising from the cooking fires of the main square – Djemaa El Fna, the “place of the dead” or “place of the vanished mosque” – and the buskers and snake-charmers were packing up for the day; soon the real entertainment of song, comedy and serious debate would begin, lasting deep into the night.

From speakers mounted on the minarets of mosques, muezzin singers called the Islamic faithful to prayer. I wandered away from the busy square, tracing a path through quiet alleyways and into the dim, labyrinthine passages of the souk, or market. Merchants sipped on sweet mint tea and discussed religion. A young couple shared a brief farewell and a kiss before approaching the separate male and female entrances to a hamam, or steam bath.

A few days later, I travelled south to Ouzoud – an isolated spot where a waterfall cascades down a 100m precipice, feeding a fertile valley in the foothills of the High Atlas mountains. Here, amongst a small Berber community of subsistence farmers, I felt I was back in Africa.

Unfortunately, there was to be no reverie of belonging. I was invited to a village wedding feast one evening: a kind gesture by my hosts but, I realised with disappointment, an imposition on my part. The bonjours and giggles of the young boys in attendance reminded me that I was an intruder, plainly a foreigner who did not fit in.

It was time to leave, but I did so without any sense of sadness at being an outsider. For South Africans, as for tourists from other African countries – and indeed, perhaps more significantly, from countries elsewhere in the world – it’s good to be reminded that a vast continent must contain vastly different peoples and places.

Africa cannot be condensed into a single, simple idea – a blank space on the map – and the dizzying difference of Morocco provides ample proof of this truth.