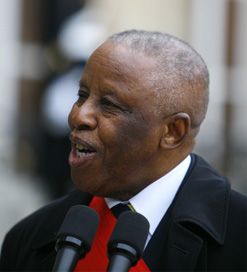 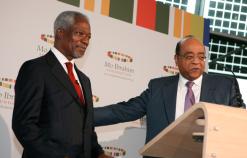 Botswana’s Festus Gontebanye Mogae, who stepped down as president of that country in April 2008, has won the second annual Mo Ibrahim Prize for Achievement in African Leadership. The prize is awarded by the Ibrahim Foundation to a former African head of state or government who has demonstrated consistent excellence in leadership.

The Ibrahim Prize is unmatched in size and scope by any other, and is worth an unprecedented R50-million ($5-million) disbursed over 10 years, with a stipend of R2-million ($200 000) annually for life thereafter. During the first 10 years the winner may also receive, at the Foundation’s discretion, R2-million annually for any good causes he or she endorses.

The former Mozambican president Joaquim Chissano became the inaugural Ibrahim Laureate in October 2007. In its citation the Prize Committee praised Chissano for his “achievements in bringing peace, reconciliation, stable democracy and economic progress to his country”.

The widow of another former Mozambican president, Graca Machel, widow of Samora Machel, now wife of revered elder statesman Nelson Mandela and herself an internationally renowned champion for women’s and children’s rights, joins the Prize Committee from January 2009.

The 2008 Ibrahim Laureate was announced on 20 October 2008 by Kofi Annan at a ceremony in London. Former President Mogae served as leader of Botswana’s government from 1998 to 2008. During his tenure he implemented programmes to develop education and health infrastructure, and privatised the airline and telecommunications industries. He also put into place one of Africa’s most progressive and comprehensive HIV and Aids campaigns.

Botswana thrived under his stewardship and grew from being one of the continent’s poorest countries at the time of independence to one of its most prosperous. The country is also regarded as one of Africa’s least corrupt, according to Transparency International.

“Botswana demonstrates how a country with natural resources can promote sustainable development with good governance, in a continent where too often mineral wealth has become a curse,” said Annan. Botswana is the world’s biggest producer of diamonds but has not allowed its mineral wealth to become a source of conflict.

Mogae was quick to point out that the country was already doing well when he came to power, but that he just consolidated existing democratic practices.

The former president has been honoured internationally a number of times, most recently with an appointment in September 2008 by United Nations Secretary-General Ban Ki-moon as one of his four Special Envoys on Climate Change.

The ceremony to confer the second Ibrahim Prize takes place at the Bibliotheca Alexandria in Egypt on 15 November 2008.

Reports say that citizens of Botswana are brimming with pride after the announcement, and that the current government is reacting with great excitement.

However, there is dissension from human rights organisation Survival International, which is voicing its displeasure over the Ibrahim Foundation’s decision as it says that Mogae oversaw the eviction of Kalahari Bushmen from their rightful land in the Central Kalahari Game Reserve. The Bushmen took the government to court and in 2006 the Botswana High Court declared the evictions unlawful.

Dr Mohamed “Mo” Ibrahim, who inaugurated the foundation and the prize, is a Sudanese-born entrepreneur who wrote his doctoral thesis on mobile communication – in 1974. Ibrahim features on Time magazine’s 2008 list of the 100 most influential people as well as the Forbes rich list. He created the Ibrahim Foundation to further his vision of a better Africa, an Africa that deserves the highest quality of governance.

The Ibrahim Prize is linked to the Ibrahim Index of African Governance, which was developed with the assistance of political scientist Robert Rotberg and his team at the Kennedy School of Government at Harvard University.

“We are shining a light on governance in Africa,” said Ibrahim, “and in so doing we are making a unique contribution to improving the quality of governance. Africans are setting benchmarks not only for their own continent, but for the world.”

First published in 2007, the index ranks the 48 sub-Saharan countries according to their governance performance and provides a holistic and objective status report using 57 indicators in five key areas. These are safety and security; rule of law, transparency and corruption; participation and human rights; sustainable economic development; and human development.

Covering issues as diverse as judicial independence, government involvement in armed conflicts, respect for civil rights, business environment, and access to drinking water, the index assesses countries on their performance in these areas.

According to the Foundation, the index has a multitude of uses, among them the kindling of debate around issues of governance, and the provision of a diagnostic framework to assess governance in the sub-Saharan region. Civil society will be also able to use it as a tool to hold their governments to account.

The latest index was published on 6 October 2008, based on data from 2006, which is the most recent year with reasonably complete available information for nearly all sub-Saharan Africa countries. However, even with a two-year lag, says the Foundation, the Ibrahim Index is more up-to-date than many other indices.

With an overall score of 85.1, Mauritius is the top-ranked country, while South Africa is fifth on the list with a score of 71.5. The other top five countries were Seychelles, Cape Verde and Botswana. These countries achieved the same rankings in the first index.

South Africa improved its rating in economic opportunity, human development, and rule of law, transparency and corruption. The country’s score dropped in the categories of safety and security and participation and human rights.

The 2008 index shows that two thirds of sub-Saharan African countries – 31 out of 48 – have improved governance performance, mostly in the areas of participation and human rights. Liberia in West Africa shows the most overall progress, moving up to 38th position and achieving a 10.4 points improvement.

The majority of countries showed a notable improvement from the 2005 data used in the first index, to 2006, in all categories except safety and security. The greatest improvements were in the area of participation and human rights, with many countries holding elections that have been declared free and fair by international observers. However, there is still room for improvement across the continent, particularly with regard to women’s rights.

Most countries showed improved access to technology, with 40 countries bettering their previous score for internet usage and 44 countries improving their scores for phone subscribers.