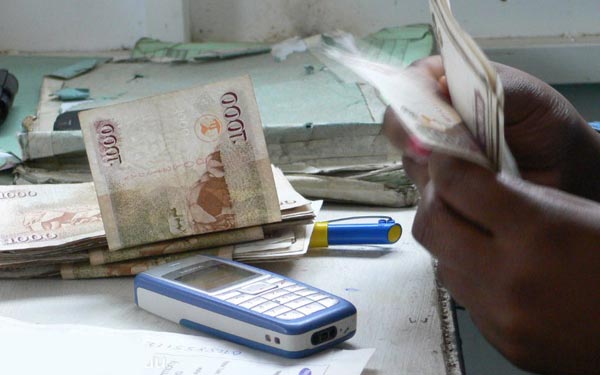 • #BringBackOurGirls shows the power of social media in Africa
• Seven reasons to be optimistic about Africa
• How Africa tweets
• Happy Africa
• Student viral campaign tells the world: Africa is not a country

The internet is coming to Africa on a handset. According to new research by Swedish telecoms multinational Ericsson, mobile data traffic in sub-Saharan Africa is set to increase 20-fold by 2019 – as opposed to only a two-fold increase in voice traffic – while cellphone subscriptions rise to 930-million.

The June edition of the quarterly Ericsson Mobility Report forecasts 635-million cellphone subscriptions in sub-Saharan Africa by the end of 2014, increasing to around 930-million by the end of 2019.

Sub-Saharan Africa is a prepaid market. In 2013, the report says, 99% of Nigerian subscriptions were prepaid, as were 98% in Kenya and 83% in South Africa.

The overall trend in sub-Saharan Africa’s mobile subscriptions growth, and the countries playing a key role in that growth. (Image: Ericsson Mobility Report)

In sub-Saharan Africa, phones are used for tasks done on laptops or desktops elsewhere in the world. Consumers use their devices all day, in different locations and for a broad range of activities. A price-sensitive market, Africa is now seeing a rapid rise in ownership of low-cost smartphones and tablets priced under US$100. This will accelerate when smart devices costing less than $50 become available in the next few years.

The rise of data phones has made connecting to the internet easier and more affordable across the region. Mobile broadband is now the primary way sub-Saharan Africa accesses the internet: 70% of mobile users in the countries researched browse the web on handheld devices, and only 6% on desktop computers. 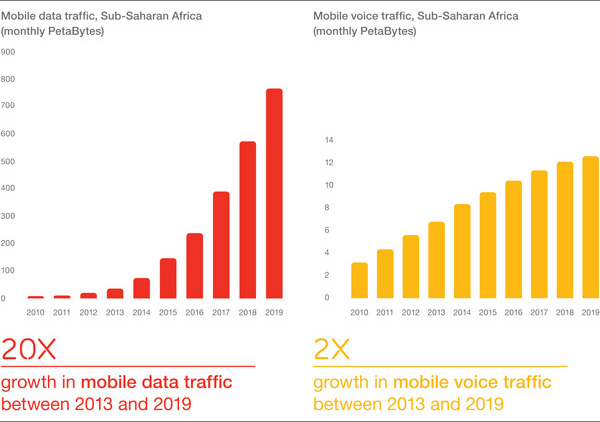 The barrier to this growth is the scarcity of spectrum, which causes traffic congestion, delays in network rollout, higher service costs and a generally lower quality of service. According to the research, 47% of sub-Saharan cellphone users believe mobile data is still too expensive, although they also believe it is cheaper and more accessible than fixed-line internet.

“Mobile operators and relevant ICT stakeholders, including governments, must drive the development of appropriate infrastructure to handle the growing traffic demand on networks,” the report says.

The low cost of mobiles and the continued drop in prices has made them available to consumers from most income brackets, especially the rising middle class. Digital communication is also growing among lower-class urban consumers, and among the poor in rural areas, where 75% of sub-Saharan Africans live. And it is helping improve social conditions. 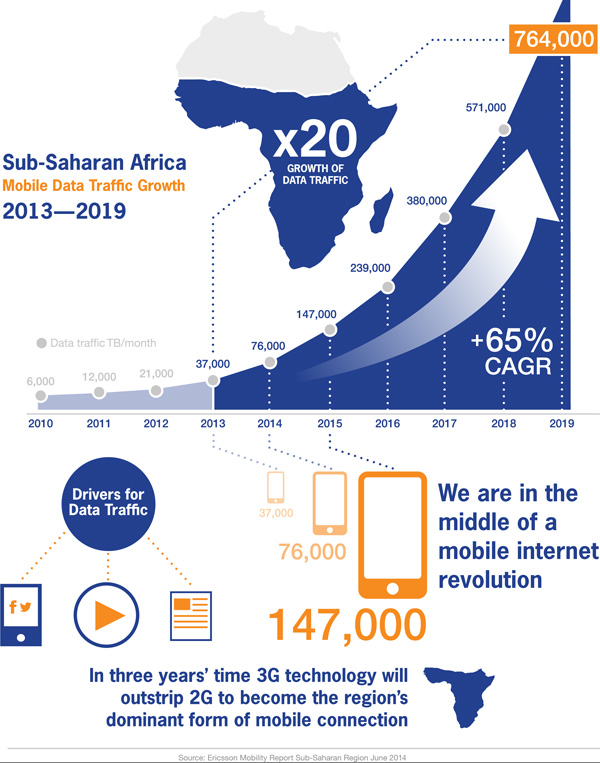 Many people remain unbanked in sub-Saharan Africa – and cellphones may be their only route to financial services. The report says 58% of handset users in the region are interested in using mobile banking in future. Mobile banking is also an example of digital services moving moved beyond the cities. It gives rural people cheaper access to their money, reducing the need to travel and generally cutting the cost of financial services.

A new electronic wallet system has helped transform Nigerian agriculture. Farmers are able to get electronic vouchers for subsidised seeds and fertilisers sent directly to their phones, allowing them to pay for farming inputs from local dealers.

Kenya-based MedAfrica is a mobile app providing basic information about health and medicine. It can be accessed on all cellphones – not just smartphones. People use the information independently, lowering the burden of care on doctors and reducing the need to travel and queuing.

“Affordable access to mobile broadband is not a luxury, but a necessity in regions such as sub-Saharan Africa,” the report says.

As low-cost smartphones and tablets enter the sub-Saharan market, they create demand for locally produced content. Apps are being developed for African entertainment, communication, utility and productivity.

In Kenya, Mozambique and Nigeria, smartphone apps are increasingly used to broadcast TV and media services, boosting the production of local content.

The smartphone revolution has been a boon to the film industry of Nigeria, one of the top producers of movies in the world. Some Nollywood movies have even played a role in promoting smartphone uptake in the country.

Consumers’ increased internet access has boosted new businesses offering value-added apps and services for smart devices, contributing to the growth of many industries in sub-Saharan Africa. In the financial sector, for example, mobile phones have transformed consumers’ banking behaviour and promoted financial inclusion.

The rise in sophistication of social networking platforms is also contributing to increased mobile data traffic. According to the report, 74% of sub-Saharan social network users send messages to friends, 62% check their friends’ updates, 46% upload photos and videos, and 15% stream content from these platforms.

The social, economic, political and technological gains ICT and broadband offer sub-Saharan Africa are huge. As a result, most countries in the region have national broadband policies in place to deal with this, and the rest are busy developing them.

“Sub-Saharan Africa is a dynamic region, with technological advancements becoming a big part of how society functions,” the report says. “Consumers in the region are fast becoming the creators of content and deciders of services provided in the market.”