After more than two decades of work, Mozambique is now clear of landmines – freeing up valuable agricultural land, opening up tourism and infrastructure development, and ensuring the safety of rural communities. 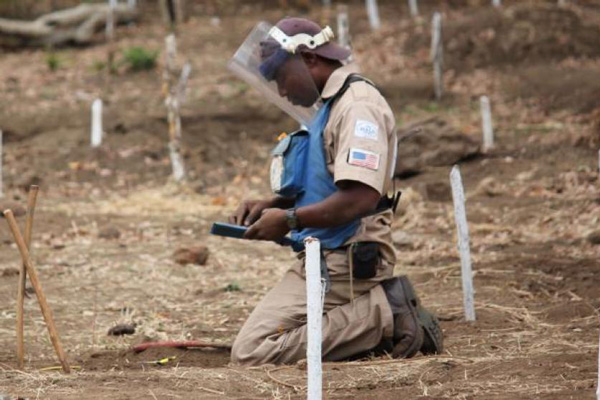 The two decade long struggle to rid Mozambique of anti-personnel mines ended with a loud bang of the final known mine in the country. (Image: Halo Trust)

After more than two decades of work, Mozambique is now clear of landmines – freeing up valuable agricultural land, opening up tourism and infrastructure development, and ensuring the safety of rural communities.

The antipersonnel mines were first planted in the 1960s during Mozambique’s war for independence from Portugal, then in the civil war that followed. Mines continued to kill and maim thousands of people long after peace was declared in 1992, and made large tracts of the country impassable.

The destruction of the country’s last known landmine is the conclusion of 22 years of work by the Halo Trust, a mine clearance charity.

A boon for economic development

Since Halo began work in 1993, mine clearance has helped the country develop its infrastructure, exploit valuable commodities such as gas and coal, increase tourism and attract international investment. Mozambique’s GDP has grown 7% a year since Halo began demining, and the country now has one of the world’s fastest growing economies.

“Mozambique is a compelling example of how dealing with the deadly debris of war systematically and in partnership with government, local people and donors can bring stability, recovery and growth to countries ravaged by war,” James Cowan, CEO of the Halo Trust, said in a statement.

“Halo is proud to have been part of such a powerful legacy and hopes today’s news provides the momentum to strive for a mine-free world by 2025.” 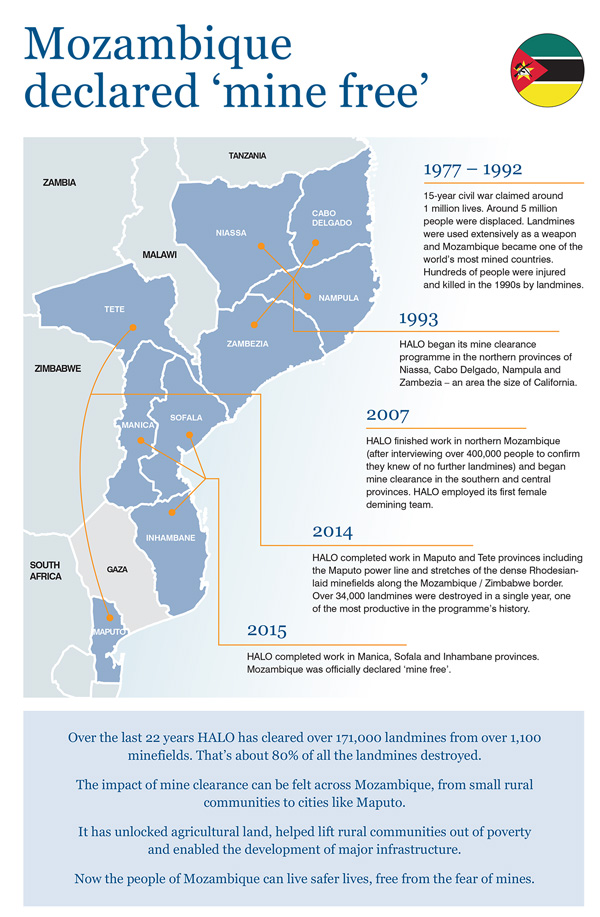 A timeline of how Mozambique became mine-free. (Image: Halo Trust)

More than 1 600 Mozambican men and women have been employed by Halo over the past two decades.

Using both manual and mechanical demining tools, they have made over 17-million square metres of land safe. Overall, Halo staff have cleared more than 171 000 landmines – about 80% of all the mines destroyed.

“This is a proud day for Mozambique,” said Alberto Augusto, director of the Mozambique Institute for Demining. “Ridding our country of landmines was tremendously difficult, but the bravery and determination of our demining teams proves to the world that it is possible for countries to become mine-free.

“We are truly grateful to those who risked their lives in order to protect those of our children and future Mozambicans.”