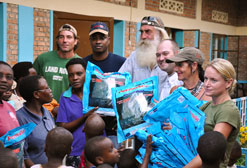 Adventurer Kingsley Holgate hands
out mosquito nets during a United
Against Malaria expedition in Burundi.
(Image: United Against Malaria) 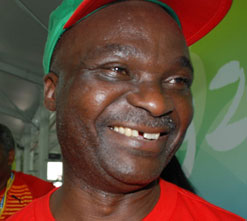 The legendary Roger Milla, who has himself
suffered from the disease, has joined
the United Against Malaria campaign.
(Image: Wikimedia)

Legendary African footballer Roger Milla and Fifa are to tackle malaria by joining the United Against Malaria partnership.

The former Cameroonian forward, whose Milla jiggle is said to have sparked the popular trend of dancing in celebration when a goal is scored, joins fellow football stars such as Kolo Toure and Didier Drogba of Côte d’Ivoire, Ghana’s Michael Essien, Malian Frédéric Kanouté, and American Landon Donovan, who have thrown their weight behind the campaign.

In addition, 16 national football associations in Africa have pledged to support the cause.

The world football body and Milla declared their support for the campaign, which aims to wipe out malaria deaths by 2015, in Johannesburg soon after the start of the 2010 Fifa World Cup.

They hope that their contribution will help to leave a lasting World Cup legacy that will benefit millions.

“This World Cup is special as the first one in Africa,” said Milla, “and by using football, the United Against Malaria campaign has built up a formidable partnership to end deaths from this terrible disease.”

The footballer added that his contribution to end the spread of the disease will be boosted by the campaign’s resources.

Fifa social responsibility head Federico Addiechi expressed his hopes that the African tournament will have a positive impact on the whole continent.

“We have asked national teams in Africa to take on a cause to support and use their profile to make a difference in their countries,” he said, adding that the support of Milla, one of Africa’s greatest footballers, will put malaria high on the agendas of leaders across the continent.

The United Against Malaria campaign was launched in 2009 with the aim of using the universal sport of football to highlight the ongoing battle against malaria, and the progress that has already been made.

The campaign draws on the high profiles of celebrities, including football stars, and partners with NGOs, governments, policy makers, corporations and individuals to raise awareness that malaria is preventable and treatable. It also focuses on the various preventive measures available.

While South Africa and eight other African nations have managed to halve malaria-related illness and death, according to the World Malaria Report 2009 which was released in December last year by the World Health Organisation, the rest of the continent carries a heavy burden.

The reduction in the nine countries is attributed to the use of insecticidal nets and proper treatment of patients. While great progress has been made in the distribution and availability of new treatments and insecticide-impregnated mosquito nets, and more people are aware of the benefits of indoor spraying, these efforts must be sustained if malaria is to be vanquished.

Herve Verhoosel of the Roll Back Malaria Partnership said, “We have the long-term support of a number of national football associations to help us to end malaria deaths. With Fifa and Roger Milla on board we have some powerful allies in our mission to one day end malaria deaths.”

Malaria is caused by Plasmodium parasites, which are injected into the blood through the bite of the female Anopheles mosquito. P. falciparum is the most deadly of the four human-infecting species, being the only one that kills.

Once in the blood, large numbers of parasites move through the bloodstream and settle in vital organs, which become vulnerable to damage and failure. Patients with low immunity can die from organ failure, and pregnant women and children may suffer anaemia, low birth weight, premature birth and neurological damage. Cerebral malaria is a particularly dangerous form of the disease.

A child under the age of five succumbs to malaria every 30 seconds, and about half of the entire global population are at risk of contracting the disease. Statistics reveal that 243-million cases and almost 863 000 deaths were registered in 2008. Of the deaths, 91% occurred in Africa.

Malaria is both preventable and curable, but it can only be successfully combated using a multi-faceted approach which involves not only effective treatment of patients, but also insecticide-impregnated bed nets, indoor spraying, bite prevention and the development of an effective vaccine by 2015.

However, the information needs to reach even the most remote parts of Africa, and this is where football, with its universal appeal, will play a role by helping to deliver the vital message.