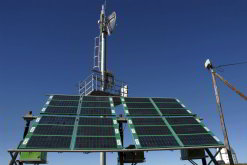 Solar power is slowly but surely gaining
ground in South Africa and on the rest
of the continent.
(Image: MediaClubSouthAfrica.com. For
more free photos, visit the image library)

Africa’s greatest resources may no longer be diamonds and gold, but instead, its big sun-drenched skies. In coming years, the continent, known for the innovation and determination of its people, could provide enough solar energy to light up some of the world’s biggest cities.

A group of students from a girls’ college in Mauritius is showing the way. The pupils have recently developed a way of producing 14KW of clean electricity daily, and their project is touted to be the model which other nations in Africa could adopt.

The use of solar power reportedly doubled in 2010, and is expected to grow in 2011 by at least 25%. However, the developing world has been slower off the mark than Western countries to use this technology, although it would derive the most advantage from solar energy – remote regions especially.

Following the Mauritian government’s December 2010 call for the population to find alternative means of producing electricity, the students from the Hindu Girls’ College in Curepipe, Southern Mauritius, set up a three-kilowatt solar power system on the institute’s roof. This simple system provides the campus with at least 20% of the power it needs.

Andrea Gungadin, the rector of the non-profit private college, said that the project is one way of avoiding the high rates that accompany the regular use of fossil fuels.

“We have so much sunshine here. Why allow it to go to waste when we can use it to produce electricity at a time when fossil fuel is becoming scarcer and more expensive?”

The college’s system consists of 17 panels and costs around US$4 600 (R33 000). However, project engineer Pavitra Maulloo said in an IPS Africa report that not all institutions could expect to invest that amount.

“Costs will vary depending on factors like the location of the site, the number of panels desired, the structure itself and access to the site,” he said.

“Investments in such a project can be covered within a five year period for an office or institution and in seven to eight years for a home. Afterwards, you just produce, use and sell your electricity for 20 years,” he said.

The idea is catching on, and the education ministry recently opened a tender for installation of solar panels at 10 public schools around the island. The ministry hopes to produce a total of 55 000KW of energy with this project, and during the holidays when the schools are empty, surplus electricity will be sold to the Central Energy Board.

Mauritius’ efforts in curbing climate change are testament to Africa’s concern with the issue.

Africa is known as the powerhouse for solar energy, and local and foreign investors are already taking advantage of the continent’s rich sunlight.

In October 2010 came the announcement that South Africa was to build a solar power park in the Northern Cape, which reportedly has the best solar radiation conditions in the world. The park will reportedly cost $21.8-billion (R150-billion).

The private sector also got in on the act when Matla Thermal Holdings partnered with a Taiwanese consortium to open a fully integrated mass production manufacturing plant for domestic and industrial solar water heaters, the first of its kind in South Africa.

The plant, worth $5.8-million (R40-million), will be situated at the East London Industrial Development Zone.

In a report published recently in British national daily The Guardian, foreign funders may shift their monies away from social issues to that of environmental justice.

The report quoted from the book Climate Change in Africa, authored by International Institute for Environment & Development director Camilla Toulmin, saying that the continent is the most vulnerable in terms of its delicate ecosystems, yet it is the least equipped to handle the coming calamities, for which it is least responsible.

This is even more of a reason for the public to become environmentally aware and responsible. And like the example at the Hindu Girls’ College, the responsibility starts in the classrooms and laboratories of Africa’s academic establishments.

“It’s not just like producing electricity and earning some money. It is also a way to teach our students about climate change, electricity production from fossil fuel, and why we need to produce it from renewable sources,” said Gungadin.