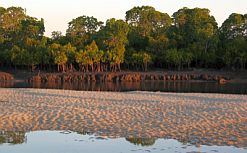 African mangroves are getting a helping
hand from Nasa. (Image: Nasa)

Africa’s endangered mangroves are getting a helping hand from the National Aeronautical and Space Administration (Nasa), thanks to a Beninese scientist from the space agency who recently completed what is believed to be the first ever comprehensive survey of the continent’s mangrove swamps.

Results of the survey will help African countries anticipate changes and implement measures to manage and protect this sensitive ecological system, which is threatened by commercial fishing, pollution, real estate development and deforestation.

In many parts of the world, mangrove swamps are disappearing faster than tropical rainforests or coral reefs – faster, in fact, than survey data can be produced, giving ecologists no time to take action.

However, the study carried out by environmental scientist Dr Temilola Fatoyinbo, currently based at Nasa’s Jet Propulsion Laboratory as a Fellow under its post-doctoral programme, could turn the situation around.

Earlier in the decade, as a graduate student at in the – and always mindful of the delicate situation of the mangroves back home – Fatoyinbo decided to tackle the issue.

Her project included the development of a new satellite technique for surveying the area, height and biomass of mangrove stands. Biomass in this case refers to the sum total of all parts of a plant, both above and below ground, and is helpful to scientists for calculating the amount of stored carbon dioxide.

“We’ve lost more than 50% of the world’s mangrove forests in a little over half a century; a third of them have disappeared in the last 20 years alone,” she said, “but hopefully this technique will offer scientists and officials a method of estimating change in this special type of forest”.

Mangrove conservationists now have three new types of mangrove maps to draw on – area maps depicting how much of the continent is covered by mangroves; a 3D representation of the height of mangrove forest canopies; and biomass maps.

To check the accuracy of her measurements, Fatoyinbo travelled to to personally measure trunk diameters and tree heights. Her empirical data closely matched the numbers generated by the computer.

An August 2009 Nasa report, detailing Fatoyinbo’s research, claimed that “impoverished fishermen along the coast of tropical African countries like Mozambique and Madagascar may have only a few more years to eke out a profit from one of their nations’ biggest agricultural exports”.

The report went on to say that in a few decades’ time, this source of livelihood may have disappeared altogether. Should that happen, said Nasa, the implications are severe not only for the botanical world, but also for climate change, biodiversity and general quality of life on earth.

Mangroves, which grow in the salty zone between land and ocean, occur along much of Africa’s coastline – from in West Africa down to , and from to on the east coast. They’re also found in the and .

They play a crucial environmental role, as they stabilise the coastline against erosion, act as a buffer for ocean surges brought on by storms, and provide a haven for over 1 300 species of sea creatures, birds and animals. Many of these species are themselves endangered.

Mangroves also take carbon dioxide out of the atmosphere at an estimated rate of about 123kg per hectare.

However, they play an equally important social and economic role in the fortunes of nearby communities. The swamps are ideal for small-scale rice and shrimp farming, the creatures that dwell among their gnarled roots provide added food security for communities, they provide timber and firewood and they protect villages from harsh storms, winds and floods blowing in from the sea.

’s 3.2-million ha of mangroves, running along 2 700km of shoreline, amount to roughly 19% of the global total.

The largest surface area of mangroves in all of Africa is found in , where the leafy stands play an important role in supporting regional wildlife as well as fishing. However, the plants are threatened by oil spills. In East Africa, the highest concentration of mangroves is found in .