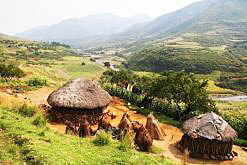 Maliba’s chalets are built in the Basotho
style and luxuriously decorated inside.
(Image: Maliba)

Maliba Mountain Lodge in Lesotho, the country’s first five-star establishment, has received the nod from prestigious magazine Tatler, which voted it as a top travel pick for 2010.

The lodge is one of Tatler’s 101 best hotels in the world and features in the magazine’s 2010 travel guide.

Compiled by travel editor Melinda Stevens, the list of top destinations is divided into categories such as Beach Hideaway, Glorious Weekends, Happy Families, and Into the Wild – where Maliba shone.

’s Minister of Tourism, Culture and Environment, Lebohang Ntsinyi, praised Maliba for its accomplishment, adding that it will help to raise ’s status as a global tourism destination.

The small Southern African kingdom, which boasts some of the most spectacular mountainous scenery in the world, is an enclave of .

Not for nothing is the country known as the Kingdom in the Sky. Its lowest point, the junction of the Orange and Makhaleng Rivers, stands at 1 400m above sea level, while the highest point, the mountain named Thabana Ntlenyana (Sesotho, meaning “beautiful little mountain”), soars 3 482m into the air.

Maliba Mountain Lodge took around five years to design and develop, and is situated in a reserved area within the in the Butha-Buthe district in northern . Less than five hours by road from and six hours from , the mountain retreat is ideal for weekend getaways.

“The bedrooms are like teapots with thatched lids and log fires, and the main building has a deck with wondrous views,” wrote Stevens.

There are also four self-catering thatched lodges that can sleep up to eight people each. The double-storey Maliba River lodges have the same creature comforts as the chalets but are fully self-contained.

There is no shortage of activities for adventure enthusiasts, with several bush trails and bridle paths skilfully navigated by the rugged local Basotho ponies, a number of natural rock pools for swimming, and a ski resort in the vicinity. The super energetic can tackle the 39km hiking trail that connects Tsehlanyane with the Bokong Nature Reserve.

Maliba is also ideal for those seeking a quiet break. Three nearby Basotho villages offer a chance to experience the lifestyle and everyday customs of the people, and visitors may also experience culturally significant sites such as the Liphofung rock art caves and ’s fossilised dinosaur footprints.

A high-altitude botanical garden is reportedly in development.

Tsehlanyane, an important indigenous woodland area, is one of ’s two proclaimed national parks – the other is the in the south-east of the country.

The 5 600ha Tsehlanyane stands at the point where the Tsehlanyane and meet. At an elevation ranging between 1 940m and 3 112m, the terrain is mostly sub-alpine, which refers to an area situated just below the timberline in a mountainous region. It is home to the indigenous evergreen Leucosidea sericea, known as Oldwood or Che-che, as well as the endangered butterfly Metisella syrinx.

Animals spotted in the area include the black-backed jackal, porcupine, rhebuck, African wild cat, caracal and clawless otter. Over 220 species of flowering plants have been noted, as well as some 70 bird species.

Kingdom in the Sky

’s area covers just over 30 000 square kilometres, making it a little smaller than the state of . It is the southernmost landlocked country in the world and boasts spectacular natural scenery.

Formerly known as Basutoland, the country gained independence from the in 1966 and celebrates Independence Day on 4 October. It is governed by a constitutional monarchy coupled with a parliamentary system.

The monarch is Letsie III, who succeeded his father King Moshoeshoe II when he was deposed in 1990. The royal palace and parliamentary building is situated in the capital city, , whose sister city is .

is now a member of the . According to the CIA World Factbook, the country has one of the highest literacy rates in , with 95% literacy among women and 75% among men.