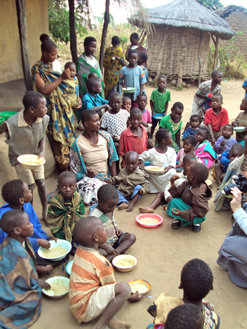 The scope of Malawi’s health assistants is being broadened to help treat child malnutrition and compensate for a lack of medical skills in the country.

Rudi Thetard of Management Sciences for Health – an NGO working to strengthen public healthcare across the world – says that since 2008, about 1 000 health surveillance assistants (HSAs) had completed the several-week-long training course.

After an additional six days of training on top of their basic module, many were conducting “village clinics”, enabling more communities to access treatment for malaria, fever, pneumonia and diarrhoea. Access to treatment is up by a quarter in the areas in which the assistants were deployed, he said.

The World Health Organisation (WHO) estimates there are about two doctors and 59 nurses for every 100 000 people in Malawi. In 2006 the vacancy rate for nurses stood at about 65%.

It is also estimated that about 59% of Malawi-born physicians are practising outside the country.

Donors contribute about 60% of the country’s total health expenditure, according to the WHO.

After basic training, the low-skilled health practitioners initially work with clinical officers – medical personnel who have completed a three-year course – who are used as substitutes for physicians.

The idea of using health assistants in Malawi first came about in the 1960s as a way to help eradicate smallpox.

HSAs with additional training travel to remote and isolated communities by bicycle, providing medical services that were previously unavailable.

“Simple approaches allow for the expansion of services. Even Malawi’s scale-up of antiretrovirals, which has been very successful, is based on very simple approaches and standard treatment regimens,” Thetard said.

Thetard added some medicines, especially anti-malarials, were being overused and this could be corrected by equipping HSAs with on-site diagnostic tools, such as rapid malaria testing.

Learning from the severe droughts of the late 1990s, where community management of acute malnutrition was first employed, HSAs were now playing a crucial role in treating this among children, Thetard said. Seasonal or cyclical hunger means about 47% of Malawian children are classified as stunted, he added.

Nowadays a nurse or clinical officer determines the severity of a child’s condition and whether the case merits hospitalisation or management by HSAs at their homes.

Until recently children requiring nutritional rehabilitation were routinely admitted to hospital for up to three weeks, removing them from the home environment, and burdening poor families with additional transport costs to visit their children.

Thetard said the drought experience had shown that as many as 80% of acutely malnourished children can be treated as outpatients and that through the establishment of community nutritional services, almost double the number of paediatric malnutrition cases can be identified.

“In child survival this kind of simplicity is so important, and moving away from a heavily clinic-based approach is possible,” Thetard said.