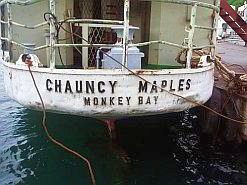 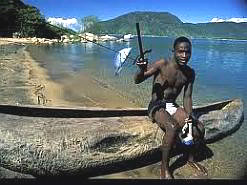 Villagers who live along Lake Malawi
usually use dug-out canoes to reach
their nearest medical facility. This is
dangerous during high tides and could
lead to drowning.
(Image: Wikipedia)

The historic Chauncy Maples, Malawi’s oldest ship, is being turned into a floating clinic to bring much-needed healthcare services to fishing villages along the shores of the country’s massive lake.

Currently, it can take up to 16 hours for Malawians living in remote lakeside villages to reach their nearest medical care facilities, which could be as far as 80km away.

Their means of travel is usually a dug-out canoe, which offers little protection against crocodiles and hippos, and paddling during high tide means drowning is also a threat.

These risks have prompted the decision to turn the ship into a floating clinic.

Dr Charles Mwansambo, Malawi’s principal health secretary, said: “Districts that are part of Lake Malawi still have an average of more than 25% of their populations unable to access healthcare.

“This presents a real challenge as people have to use any available water transportation to access healthcare, although that option may be risky at times. Water transport is also not available all the time.”

The Malawi government had already started renovating the ship in 2009 when UK journalist and author Janie Hampton visited the lake area on a holiday and resolved to raise funds to complete the project.

Hampton initiated the Chauncy Maples Malawi Trust in the same year. So far US$1.6-million (R11.4-million) has been raised, although $1.5-million (R10-million) is still needed to complete the renovation process.

Hampton said: “Everyone I met along the lakeside was very keen for this to happen.” Referring to the ship, Hampton added: “We want to make sure she will last at least another 30 years.”

According to the trust, half of the Malawian population lives in abject poverty, earning less than a $1 (R7) a day. The death rate among children under five is 111 in every 1 000, and a single doctor has to provide services to 52 000 people.

The project to revive the historic ship will boost health-service delivery, preserve Malawi’s shipping heritage, promote eco-friendly engineering by recycling old parts of the ship, and teach locals about engineering principles and marine life. It will also become Malawi’s national symbol of pride.

Major sponsors of the project are Thomas Miller, an insurance conglomerate which donated $400 000 (R2.7-million) and the Ana Leaf Foundation, a charity organisation that donated $161 000 (R1-million).

The bishop behind the ship

The ship is the namesake of Bishop Chauncy Maples, an Anglican missionary who set up the Anglican Mission on Likoma Island on Lake Malawi in 1886.

The cleric was consecrated as the sixth Bishop of Nyasaland in 1895 and on his way to take up his duties, his ship capsized in a storm on the extensive lake. He was the only fatality.

The Chauncy Maples was commissioned in 1898 and was designed by Henry Brunel and Sir John Barry.

It was assembled by 1901 and its initial purpose was to act as a floating missionary school, an emergency refuge from Arab slave traders and a hospital ship.

The third largest lake in Africa

Lake Malawi is situated between Malawi, Mozambique, and Tanzania. It is the third largest lake in Africa and is 580km long and 75km wide.

The biggest body of freshwater in Africa is Lake Victoria, and the second biggest is Lake Tanganyika.

Lake Malawi is one of the country’s major tourist attractions, boasting stretches of unspoilt beaches and luxurious resorts.

The lake is rich in cichlid fish, which is the basic staple food for people living in the villages along its shores.