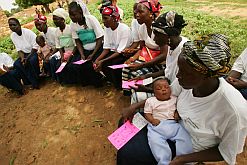 The Freedom From Hunger organisation,
funded in part by Glaxo, works with West
African financial institutions to provide
malaria education as part of its “Credit With
Education” programme. (Image: Glaxo)

The first five trial participants and their
mothers in front, with Bagamoyo staff
standing behind. (Image: MVI)

GlaxoSmithKline’s (GSK) RTS,S malaria vaccine has entered phase three of its clinical trial. This is the critical proof-of-concept stage and if it succeeds, the drug could be on the market by 2012.

Viewed as the most advanced malaria vaccine available, the RTS,S vaccine passed its initial tests with flying colours. The results of the earlier studies were published in the December 2008 edition of the New England Journal of Medicine. Experts subsequently recommended that studies be advanced to the next stage.

This is significant because few vaccines manage to meet the rigorous standards of a full clinical trial, which may take up to 12 years. For any drug to make it this far shows that it is very promising indeed, and RTS,S is the first malaria candidate to do so.

Should phase three trials be successful, the manufacturer is hoping to apply for regulatory approval in 2011 to begin marketing the drug by 2012.

To date, GSK has invested over US$300-million (R3-billion) in getting RTS,S to this stage since the drug’s initial discovery in 1981. The pharmaceutical giant received funding for further development in 2001, from the non-profit PATH Malaria Vaccine Initiative. This initiative was born out of a grant to PATH – the Programme for Appropriate Technology in Health – by the Bill & Melinda Gates Foundation.

The Malaria Vaccine Initiative is also striving to ensure that RTS,S is accessible to those who need it most, and has entered into talks with other organisations to see how the price can be kept as low as possible.

The organisation’s director Christian Loucq said emphatically that the cost to African babies and mothers would be zero.

GSK has stated that the development of an effective malaria vaccine, especially for women and children, is one of its primary goals. The disease kills close on one-million people every year. Of these, 90% live in sub-Saharan Africa, and most are children under the age of five.

The prevalence of malaria is both a cause and a result of poverty. It is caused by the invasion of red blood cells by parasites of the genus Plasmodium. Of the four species known to infect humans, P. falciparum is the most deadly and is the only one that kills.

RTS,S is a recombinant protein that fuses a part of the P. falciparum circumsporozoite protein (a cell surface protein of the infectious sporozoite life-cycle stage) with a surface antigen from the hepatitis B virus.

In addition to its anti-malaria function, RTS,S therefore also stimulates an immune response to hepatitis B, a common infection in developing countries.

The previous stage of testing took place in Mozambique, Tanzania, Gabon, Ghana, and Kenya. RTS,S was shown to drastically reduce the number of malaria infections in children, slashing in half the number of severe cases over a monitoring period of eight months. There were also few serious side effects.

Researchers are hoping to repeat the phase two statistic of a 50% reduction in the number of cases, with immunity lasting for some years.

The final phase of clinical trials started at the Bagamoyo Research and Training Centre, part of the Ifakara Health Institute in Tanzania. It is estimated that about 18-million people in this East African country contract malaria every year. With 100 000 losing their lives, malaria is the number one killer disease in Tanzania and is responsible for the loss of about 3.4% of GDP annually.

The trial will soon expand to cover 11 clinics in seven sub-Saharan countries, with an expected 16 000 children aged two and under taking part. The first group of five infants was inoculated in Bagamoyo at the end of May 2009.

RTS,S will also work well as part of an existing national immunisation programme, as trials have shown that it does not affect the patient’s response to other vaccines.

Once Anopheles has bitten, the infection spreads rapidly. New parasites emerge from the infected blood cells at intervals, and move through the body to settle in vital organs. The nervous system, liver and kidneys are particularly vulnerable and patients with low natural immunity can die within hours from cerebral malaria, or liver and kidney failure.

Leading international health organisations fight its spread on a daily basis, using a strategy known as the Malaria Vaccine Technology Roadmap. The roadmap’s interim goal is the introduction, by 2015, of an effective first-generation vaccine that gives immunity to at least 50% of patients for longer than a year.

The landmark goal is the development by 2025 of a vaccine that would provide more than 80% protection and last for more than four years.

Another important intervention is World Malaria Day, a global event that aims to provide education and spread the knowledge that malaria is both preventable and curable. The 2009 commemoration took place on April 25.