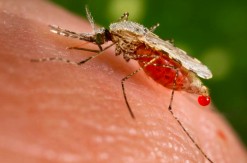 Anopheles stephensi is responsible for
malaria transmission in India and Pakistan.
(Image: VectorBase)

Scientists at the University of Arizona have bred a mosquito that is immune to malaria infection. With about half the global population at risk of contracting the disease, and the global malaria-related death toll approaching 1-million people annually, this could save millions of lives – most of them in Africa.

The female Anopheles mosquito transmits the disease to humans through a bite. Single-celled parasites of the genus Plasmodium pass into the blood of the victim and begin to multiply, eventually settling in vital organs such as the liver and kidneys. These become vulnerable to damage and failure, which may result in death.

Most of the annual deaths – around 90% – occur in sub-Saharan Africa, and one child under the age of five dies from malaria every 30 seconds.

In the past scientists experimented with the insect’s genetic makeup in the hopes of breeding a mosquito that can’t pass on the disease. Their efforts were only partially successful as the insects still managed to infect humans, albeit to a much reduced extent.

Now they’ve taken the concept one step further, with the development of an Anopheles stephensi mosquito that is immune to infection by Plasmodium falciparum, the parasite variety that is most dangerous as it is the only one that kills people. The finding was published in the online version of peer-reviewed open-access journal PLoS Pathogens in July 2010.

One discovery leads to another

Under the guidance of team leader and entomology professor Michael Riehle, the group of scientists from the Arizona and California universities initially set out to discover how to shorten the lifespan of A. stephensi, an important malaria carrier in the Indian subcontinent.

This is significant because parasites must mature for two weeks inside their host before they’re ready to be passed to humans, and mosquitoes in high-risk areas live for about two weeks. Only the oldest individuals are able to transmit the disease.

The team felt that a lifespan reduction of even days could shrink the window of opportunity for Plasmodium, and result in a dramatic reduction in malaria infection rates. They targeted a gene that was thought to be responsible for both lifespan and resistance to infection. By injecting this modified genetic information into mosquito eggs, they bred a generation of insects that carried new genetic material.

According to Riehle, they were hoping just to see an effect on the insect’s growth rate or lifespan – which was indeed cut by about 20% – but were pleasantly surprised to discover that their manipulation also completely blocked infection.

The super-insects were tested with a meal of Plasmodium-infected blood, with the encouraging result that not one mosquito became infected.

“If even a single parasite slips through and infects a human, the whole approach will be doomed to fail,” said Riehle, “and so you need mosquitoes that are no less than 100% resistant.”

The team is hoping that these genetically modified mosquitoes will be eventually released into malaria-ravaged areas where they will breed with, and replace the normal insect, whether through natural selection or with scientific help.

They are also now seeking to understand how the parasites are killed inside the mosquito’s body, because that valuable information could be used to create an even more robust insect.

According to Riehle, it will be at least a decade before the new mosquitoes will be ready for large-scale release. But before this the experts will have to address the public’s fears of putting a genetically modified creature into the wild – an idea which could alarm many.

Malaria is both preventable and curable, but field experience has shown that it can only be successfully combated with a multi-faceted approach. This involves the widespread distribution of insecticide-impregnated bed nets, indoor spraying, bite prevention and treating patients effectively. None of these strategies is as powerful on its own as it is in combination with the others.

The development of a vaccine by 2015 is also an important research goal. Although a number of vaccine candidates have gone to clinical trial, none of them made it through the long and rigorous process.

Earlier in 2010 the World Health Organisation (WHO) announced in its World Malaria Report 2009 that South Africa and eight other African countries had managed to halve their malaria burden. South Africa, Botswana, Cape Verde, Eritrea, Namibia, Rwanda, Sao Tome and Principe, Swaziland, and Zambia achieved this using a combination of insecticide nets and efficient treatment of patients, said the WHO.