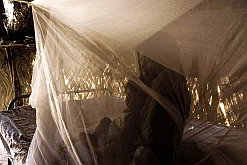 A mother and child in Niamey, Niger, take
refuge under a newly installed long-lasting
insecticidal net.
(Image: Benoist Carpentier, WHO)

“We are saving 204 000 lives per year right now over the baseline in 2000. If we can achieve and sustain universal coverage in all countries, then the number of lives saved will be enormous,” Robert Newman, director of WHO’s Global Malaria Programme, told Irin.

The number of estimated malaria cases globally in 2009 was 225-million and the vast majority of malaria-related deaths, about 91%, occur in Africa, says WHO.

The report sees the strategic scale-up of malaria prevention and control as critical in the highest burden countries: Nigeria, Democratic Republic of the Congo and Tanzania experienced more than 40% of all malaria-related deaths in Africa.

Household net ownership has reached more than 50% in 19 African countries, with more children under-five using one (35%) compared with previous years. An improvement from 5% in 2000 to 35% in 2009 in diagnostic testing and indoor residual spraying also protected 75-million people, or 10% of the population at risk in 2009.

In 2010, 11 African countries and territories – including South Africa – witnessed a 50% reduction in confirmed malaria cases and deaths over the decade, whereas in 32 out of 56 endemic countries outside Africa the decrease was even higher.

Morocco and Turkmenistan were certified by WHO as having eliminated malaria in 2009 and the European Region reported no cases of Plasmodium falciparum – the most dangerous malaria parasite species – malaria for the first time.

However, experts say that while considerable progress has been made, coverage of interventions in African countries remains below the international targets for 2010.

Recent increases in funding for malaria control reached US$1.8-billion (R12.3-billion) in 2010, resulting in major scale-up of key interventions. WHO says the amounts committed to malaria still fall short of the resources required, estimated at more than $6-billion (R41-billion) for 2010.

“The greatest challenge facing Africa in the fight against malaria is maintaining political will and financial commitment. Malaria prevention and control works,” said Newman.

“If we can achieve and maintain universal coverage with vector control [LLIN or indoor residual spraying], diagnostic testing for suspected malaria cases, and treatment with Artemisinin-based combination therapies for confirmed cases – then we can not only reach international malaria targets by 2015, but also go a long way towards achieving the health-related Millennium Development Goals,” he said.