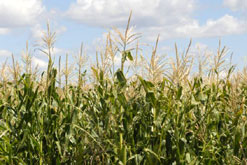 A field of maize, known in South Africa
as mealies, on a farm in the Free  State.
(Image: MediaClubsouthafrica.com. For
more free photos, visit the image library)

Sub-Saharan maize farmers are to benefit from the newly launched Improved Maize for African Soils (Imas) project, which promises new maize varieties that yield up to 50% more.

The unforgiving African climate often makes it difficult for farmers, especially subsistence farmers, to earn a sustainable income. Pests, drought, weeds, diseases, and poor soil are just a few of the issues they have to contend with every day.

Small-scale farmers also have little or no access to fertiliser and improved seed, and their average maize (Zea mays L.) yields are far below those of farmers in the developed world. This threatens food security for thousands of families.

The new public-private scheme, launched earlier in 2010, aims to change this situation. Imas is a multinational partnership led by the El Batán, Mexico-based International Maize and Wheat Improvement Centre (Cimmyt) with funding to the tune of US$19.5-million from the Bill and Melinda Gates Foundation and USAid.

Dr Shadrack Moephuli, CEO of the South African organisation, said that the development and application of new knowledge and technology to agriculture is a priority.

“We are committed to ensuring that maize varieties that will help resource-poor farmers are developed using the latest technologies available through the Imas global partnership.”

South African and Kenyan farmers will be the initial beneficiaries, with other African nations following shortly afterwards.

According to Cimmyt, farmers in South Asia use around 100kg of fertiliser per hectare, compared to African farmers who apply a scant 9kg over the same area. And up to half of this tiny amount is lost because the soil is of such poor quality that the nutrients drain deeper than roots can reach.

Fertiliser is used so sparingly, said Moyo, because “high transportation costs due to poor roads and rail systems in their countries results in African farmers often paying as much as six times more than their US and European peers for fertiliser.”

But many farmers just can’t afford to buy this essential boost, sorely needed in the African soil which in many regions is depleted from centuries of continuous farming, for their crops. Nitrogen-deficient plants are yellow or pale green, instead of the vibrant green of a healthy plant.

It is expected that the superior maize varieties developed by Imas will more efficiently use the little fertiliser available to farmers, grow freely even in poor soil, and produce yields of between 30% and 50% more than current varieties.

It takes time and much testing before new plant varieties are ready for the market, so the first seeds will probably only be available in around four years. These are expected to deliver a yield improvement of 20%.

Further development will see higher-yield maize introduced in nine years. Because the development process involves DNA manipulation and marker techniques, all new varieties must receive regulatory approval in each country before farmers can use them.

Imas will waive royalty fees for the new varieties, so they will cost no more than other improved seeds.

South Africa’s agricultural sector contributed some R36-billion (US$4.9-billion) to the economy in 2007, with the total value of agricultural produce increasing to R111.8-billion ($15.2-billion) compared to R93.4-billion ($12.7-billion) the previous year.

Although commercial farming is a major contributor to the GDP, there is also a substantial subsistence sector comprising thousands of small-scale farmers.

Maize is the country’s main crop, and the staple food of millions of people in the Southern African region and elsewhere on the continent.

South Africa is the main maize producer in Southern Africa. According to a March 2010 report on the website of the UN Food and Agriculture Organisation (FAO), a near-record maize surplus is expected for the 2010/2011 year, which means that the country will have enjoyed three successive years of above average maize harvests – assuming that this year’s harvest meets expectations.

This puts the 2010 harvest at about 8% above the previous year, and a remarkable 31% above the average of the previous five years. The growth is attributed entirely to the increased popularity of white maize.

With maize prices having dropped in recent months, the outlook is good for domestic supplies as well as exports. The FAO report said that the exportable maize surplus is estimated at around 3-million tons.

A field of maize, known in
South Africa as mealies, on
a farm in the Eastern Free
State.
Photo: Graeme Williams, MediaClubSouthAfrica.com
Read more: /index.php?option=com_content&view=article&id=661&Itemid=75#ixzz0lGiCCXjU