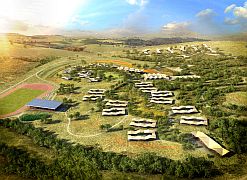 Some of the girls to enroll at the academy
have been orphaned by the aids epidemic.

Madonna unveiling the site of the
academy in 2009. (Images: Raising Malawi)

The words “dare to dream” signified the beginning of an inspiring journey as Madonna, the acclaimed US pop star, laid the first brick, inscribed with the adage, for the construction of Raising Malawi Academy for Girls – a school she’s building in Malawi.

Madonna attended the ceremony on 6 March to mark the start of construction of the academy, located in a village on the outskirts of the country’s capital . The US$15-million (R108.9-million) academy is part of Raising Malawi, an NGO the singer co-founded with Kabbalah rabbi Michael Berg in 2006.

It will accommodate about 450 girls from across Malawi’s 28 districts, and hopefully will enrol those from some of the Southern African country’s most impoverished families. “Our academy will educate, protect, and empower … young girls who are ‘s hope for the future,” Madonna said in a statement.

The academy, designed by New York-based architect company StudioMDA, will sit on a 46ha plot, according to design blog Inhabitat.

This land was secured from 200 villagers who were compensated with about $115 000 (R844 000) in total to be relocated. While they were reluctant to vacate the village, the government convinced them that the academy would benefit the country, and also offered them land to build new houses.

The vision for the academy is that it will fulfil a much bigger role than just that of a school, as it will also serve as a “family and support centre for many orphaned girls who have been left to raise their brothers and sisters”, said Raising Malawi. “It will also be a source of protection and access to medical care and regular meals.”

Inhabitat reports that the school will offer a library, an administration building, a dining hall, a gymnasium, a wellness centre, a sports field, 30 classrooms, 12 dormitories and 18 staff houses.

“… Most importantly it will be an outstanding school,” said Raising Malawi. “Never before will so many Malawian children have access to a school library, or be able to hold a textbook of their own.”

Developers are building the school using Hydraform bricks, a form of non-burnt bricks which cuts down on deforestation in Malawi, Inhabitat said. The academy will also generate much of its own energy, as its “entire gymnasium roof will be covered in photovoltaic panels to help supply the school with power”.

Madonna hopes the school, to be headed by local academic Anjimile Mtila-Oponyo, will produce top professionals such as scientists, lawyers and doctors, who will serve their country. She said part of its aim is to curb the prevalent trend of locals being drawn to Western countries.

“We will stop the brain drain happening in so many African nations… our students will receive an internationally competitive education while incorporating local values.”

The inclusion of Malawian cultural values will help build national pride in the students, and in turn inspire them to give back to their nation. The local culture will be preserved and passed on, with the incorporation of music, art and dance in the academy’s curriculum.

“As an artist, I know the transformative power of art,” Madonna said. “Once instilled with pride in their homeland, young women will understand the importance of remaining in and investing in their own communities.”

Children are the future

The pop star, who shot to fame in the 1980s, said she was touched when she visited Malawi in 2006. She was devastated by the impact of HIV/Aids in the country, she said, having met scores of children who had been orphaned by the epidemic.

She came across children heading their homes and raising other children, and, returning home knowing that the future of the country rested on those young shoulders, was inspired to act.

She stated that the education of girls was key to rebuilding communities and raising the nation, and was encouraged by the determination shown by the orphans. “I know they have the strength to save ; they just need to be given the tools.”

Madonna has adopted two Malawian children, David Banda and Chifundo ‘Mercy’ James, who accompanied her biological offspring Rocco and to this week’s charity tour. The star is also funding a number of charities in the country.

“It is with hope for a bright future that I am here. The brick I [laid] is not just the bedrock to a school; it is the foundation for our shared future,” she said.