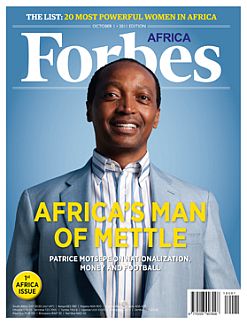 Forbes Africa, the latest edition of the world-renowned business magazine, has hit the shelves in South Africa.

The launch was held at Montecasino in Fourways, northern Johannesburg, on 29 September 2011.

The magazine’s inaugural African edition, which went on sale on 1 October, is published by ABN Publishing and distributed by On the Dot, a leading media logistics company in South Africa.

Content for the publication will be derived from a partnership with Africa Business News and TV station CNBC Africa.

The business magazine can be found at CNA and Exclusive Books, as well as other selected retailers in South Africa. It will also be available in Kenya, Nigeria, Ghana, Angola, Ethiopia, Tanzania, Tunisia, Uganda, Zimbabwe, Zambia, Mauritius, Botswana and Namibia.

Chris Bishop, managing editor of the publication, said: “I am honoured to head up Forbes Africa. It will be a crisp and lucid voice which will resonate wherever people do business – a voice that will articulate the energy, hard work and dreams of the people of Africa.

“Forbes Africa is a pan-African magazine that will celebrate and analyse the entrepreneurial spirit in the continent to spark ideas.”

In the issue Motsepe comments on the debate surrounding the nationalisation of mines, money and football.

Motsepe said at the launch: “It’s a huge honour to be on the cover of this prestigious magazine, as the people that will feature in this publication will reflect just how excellent entrepreneurship has become in Africa.”

The chairperson of Africa Rainbow Minerals and owner of Mamelodi Sundowns, one of the top four football teams in the country, is estimated to be worth US$3.3-billion (R28-billion) and was ranked the 503rd billionaire in the world in 2008.

Giving his views on nationalisation as an industry leader, Motsepe said in the first issue that he believes business should be caring about the welfare of its fellow citizens – just as it cares about share growth, competitiveness and the next dividend.

Commenting on challenges facing his football team, Motsepe said: “We mainly went into soccer not to make money, but as a means of giving back. Of course we never thought we would lose so much money.

“But it’s important for people to know they can relate to you, that you are not an arrogant, aloof, uninvolved person.”

The 20 most powerful women in Africa

The first issue of Forbes Africa also highlights the 20 most powerful women on the continent, ranging from positions in politics, telecoms, finance, mining and aeronautics.

In order from one – 10, they are: Ellen Johnson Sirleaf, president of Liberia; Ngozi Okonjo-Iweal, minister of finance in Nigeria; Joyce Banda, vice-president of Malawi; Gill Marcus, governor of the Reserve Bank of South Africa; Joyce Mujuru, vice-president of Zimbabwe; Diezani Allison-Madueke, minister of petroleum resources in Nigeria; Isabel Dos Santos, an Angolan businesswomen; Maria Ramos, CEO of Absa bank; Mamphele Ramphele, former director of the World Bank; and Linah Mohohlo, governor of the Bank of Botswana.

The honour to Wangari Mathaai, Kenyan environmentalist and political activist, comes posthumously as she died in Nairobi at age 71 on 25 September 2011 after a long battle with cancer.

She was the first East African women to receive a doctorate in anatomy and the first environmentalist to receive a Nobel Peace Prize for her initiatives in promoting sustainable development, democracy and peace.