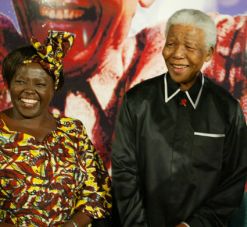 Arguably one of Kenya’s most well-known
women, Wangari Maathai was a fearless
campaigner for women’s rights and
environmental protection. She is seen
here with former president Nelson
Mandela.
(Image: Nelson Mandela Foundation) 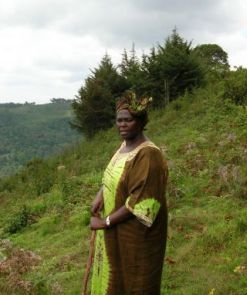 Maathai photographed in her homeland
of Kenya.
(Image: The Green Belt Movement)

She was the inspiration behind, and patron of the Billion Tree Campaign, which falls under the UN Environmental Programme and aims to halt global deforestation.

In her own country she created the Green Belt Movement (GBM), an environmental NGO with a strong social focus, especially on the empowerment of women.

Professor Wangari Muta Maathai, who died at age 71 on 25 September in Nairobi after a long battle with cancer, was a woman of firsts: in 1971 she became the first East African woman to earn a doctorate in anatomy and in 2004 was the first African woman to win a Nobel Peace Prize in recognition of her tireless work to promote sustainability, democracy and peace.

Maathai’s maxim was that when you plant trees, you also plant the seeds of peace and hope. After seeing the environmental devastation and economic ruin caused by mass deforestation in her home country of Kenya, Maathai started the Green Belt Movement in 1977, with the aim of promoting better management of natural resources.

In so doing she hoped to bring about greater sustainability, equity and justice, particularly for her countrywomen, with whom she worked closely.

The GBM has since planted more than 47-million trees across Africa, restoring degraded environments and improving the quality of life for people in poverty, especially the 900 000 women who have established tree nurseries and improved their own quality of life.

The Billion Tree Campaign reached its target in less than a year and is now aiming for the 14-billion mark. The campaign has planted almost 12-billion trees across the world and celebrates the International Year of Forests in 2011.

In a tribute to Maathai on the Green Belt Movement website, she is quoted as saying: “You cannot protect the environment unless you empower people, you inform them, and you help them understand that these resources are their own, that they must protect them.”

Jeunesse Park, CEO of the South African NGO Food and Trees For Africa, described her as an inspiration to all,

“The Tree Woman of Africa who bravely confronted governments in her efforts to save the forests – her messages were so simple, yet so meaningful. She showed how every one of us can change the world,” said Park.

“We were privileged to be acknowledged by her, to know her, share with her and plant a tree with her – she will be greatly missed.”

In a statement the Nelson Mandela Foundation announced its shock at her passing and gave praise to a woman who had achieved so much in her lifetime.

“Prof Maathai has left a lasting legacy in greater awareness and work in protecting our environment and the world,” said Achmat Dangor, the foundation’s CEO.

As the work of the GBM expanded, Maathai soon came to realise that deeper social issues underpinned poverty and environmental destruction.

Bad governance lay at the heart of Africa’s many challenges, she felt, contributing to disempowerment of the masses and the loss of vital social values which over centuries had sustained communities.

Maathai used tree-planting to drive a larger environmental, economic and social agenda. She became especially vocal about leadership, or the lack thereof, in Africa at large. In her own country during the 1980s and 90s, she spoke out strongly against the unbridled human rights abuses of then-Kenyan president, Daniel arap Moi.

As a consequence of her ongoing crusades against environmental destruction, and her outspoken stance against the government, Maathai and her staff were sometimes physically harassed, assaulted and even jailed.

During one of her many interviews she had this to say about Africa’s leadership: “Our leadership in Africa is characterised by corruption, selfishness and greed which has literally torn our continent apart.” This, she said, was because “our leaders are not willing to serve”.

In 2005, Maathai delivered the third Nelson Mandela Annual Lecture in her capacity as Kenyan deputy minister of environment.

“We need people who love Africa so much that they want to protect her from destructive processes,” she said in her address. “There are simple actions we can take. Start by planting ten trees each of us needs to absorb the carbon dioxide we exhale.”

In the same speech Maathai also asked people to practice the 3R campaign – reduce, re-use, recycle – and to get involved in local initiatives and when possible, volunteer to serve the community as best they can.

As an MP during the early 2000s, she advocated for reforestation and the protection of forests. She was a tireless campaigner for education and empowerment and the role of the government in bringing about change.

On the website the remaining members express their deep sadness at her passing, but remember Maathai for her “fearless strength in adversity, her creative approach to building a peaceful, healthy planet and her hard work to inspire and empower women”.

As concern over global warming became more pronounced, Maathai added her voice and efforts to the worldwide campaign to fight climate change.

The last years of her life saw her increasingly involved in global issues, specifically advocating for the protection of indigenous forests and the inclusion of civil society in policy decisions.

As a result of her efforts she became goodwill ambassador for the Congo Basin rainforest in 2005 and in 2009 she was designated a UN messenger of peace by Secretary-General Ban Ki-moon.

One of her final contributions was to establish the Wangari Maathai Institute for Peace and Environmental Studies in 2010, bringing together academics to share experiences and research.

The Green Belt Movement has announced the establishment of a memorial fund to continue Maathai’s legacy.