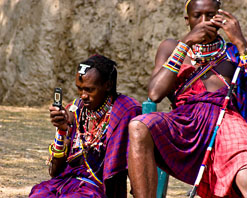 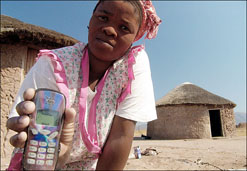 Mobiles have made it easier for those
in rural South Africa to communicate with
relatives in the city.
(Image: w3.org)

By the year 2012, 485-million people in Africa, or 38% of the continent’s population, will be mobile phone users. This was revealed at the 11th AfricaCom conference, held in Cape Town on 18 November.

The two-day event brought together over 3 500 people from various sectors of the telecommunications industry, including fixed, mobile and wireless operators, investors, vendors, regulators and industry analysts.

Telecommunications companies such as South Africa’s Vodacom and MTN shared their plans to expand the mobile industry in Africa.

Other issues discussed included broadband opportunities on the continent, with the launch of new submarine cables set to improve connectivity.

The event’s exhibition was also a great success, with 170 exhibitors showcasing their businesses. This gave delegates a chance to network and share in their common interest of growing the African telecommunications market.

Another focus was the launch of wireless networks across Africa, notably iBurst and Polka in South Africa, and its positive impact in lowering operator costs.

As a result of the rapid expansion of mobile use on the continent, operators have been forced to diversify the types of packages offered to clients in a bid to attract their business.

Operators agreed that it was important to ensure that they offered a quality network, first-class coverage, relevant services, and a strong brand to their clients.

According to MTN representatives, the mobile network had 450 000 users in Rwanda by the end of 2007. By mid-November 2008, this figure had grown to more than 1-million.

MTN’s managing director in South Africa, Tim Lowry, says by the end of 2009 the number of mobile users in Rwanda is expected to grow to about 2-million.

Lowry added that mobile phone affordability should be taken into consideration when developing the African market.

He pointed out that MTN representatives had spotted phones selling for as little as between US$10 (R102) to $12 (R123) in China.

According to his calculations, 5 000 to 6 000 of the low-cost phones could be moved off the shelves every week in countries like Uganda, where there is still much growth potential.

During the conference, the first AfricaCom Awards ceremony was held to celebrate excellence in Africa’s dynamic telecoms markets. Seven companies were rewarded for their work.

Kenya’s Safaricom was awarded for the best rural market solution and the coveted Changing Lives award for its M-Pesa service.

Uganda’s Warid Telecom walked away with two awards after they were named the best new entrant and best customer service provider.

In October 2007, the mobile phone industry, represented by the Global Systems for Mobiles Association (GSMA), announced that it was to invest more than $50-billion (R5-billion) in sub-Saharan Africa over the next five years to provide more than 90% of the population with coverage.

The announcement was made at the Connect Africa summit in Kigali, Rwanda.

The GSMA is the global trade association representing more than 700 GSM mobile operators across 218 countries worldwide.

The investment will be used to extend the reach of GSM mobile networks, which are enhanced with the GPRS, Edge and HSPA technologies.

MTN, Vodacom, Orange, and Celtel are among the African mobile operators planning to invest heavily in the expansion and enhancement of their networks.

GSMA estimates that the mobile industry has invested $35-billion (R3.5-billion) providing more than 500-million people – or 67% of the population – in sub-Saharan Africa with coverage.

“This surge in investment by the mobile industry has changed the lives of millions of Africans, catalysing economic development and strengthening social ties,” said Rob Conway, CEO of GSMA.

Currently, there are more than 150-million mobile subscribers in sub-Saharan Africa.

According to the GSMA, as the number of new mobile users continues to grow, so too will economic prosperity in the areas where there is most expansion.

The organisation estimates that for every 10% in mobile use per country, it can increase the annual growth rate of GDP by up to 1.2%.

In order to create the conditions that will maximise the benefit of this new investment, the GSMA called on governments across sub-Saharan Africa to “urgently remove” the barriers in the path of entrepreneurs.

In particular, African governments need to ensure that sufficient spectrum is available to enable the hundreds of millions of Africans, who live beyond the reach of today’s fixed networks, to gain access to cost-effective broadband services, it said.

Research on mobile use in South Africa conducted by Market Tree market research consultancy indicates that in 2005, 41% of adult South Africans had a mobile.

In 2004, 10.2-million South Africans adults owned a mobile. Of those, 85% did not have a contract and relied on airtime vouchers, with an average of R95 ($9 dollars) spent each month.

In 2004 Gauteng province had the highest number of mobile users, with 48% of adults using mobiles, while the Western Cape had the second highest with 43%.