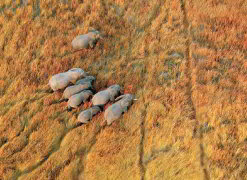 The Long Run initiative encourages
companies to run their operations in
a sustainable and eco-friendly way.

The company’s Children in the Wilderness
programme helps youngsters whose lives
are troubled by poverty or illness to
experience nature at an educational camp.
(Images: Wilderness Safaris)

Established in 2008 by business entrepreneur and CEO of global sportswear manufacturer Puma, Jochen Zeitz, the Zeitz Foundation is a non-profit organisation headquartered in Kenya.

The foundation’s flagship programme, the Long Run, was launched in 2009 with a philosophy of taking action today to ensure a better tomorrow. Sustainability is a top priority, achieved through a holistic balance of conservation, community, culture, and commerce, or what the Zeitz Foundation calls the 4Cs.

These four principles are at the heart of the Global Ecosphere Retreat (GER) certification system, for certified Long Run destinations which embody the 4Cs in their operations.

Leading the way in sustainable tourism

In May 2011 JSE-listed Wilderness Holdings Limited not only became the first African and South African supporter of the Zeitz Foundation’s Long Run scheme, but also the first in the tourism industry.

Along with other brands such as Sefofane Air Charters and the Safari and Adventure Co., Wilderness Safaris is a thriving component of the group.

Established in 1983, Johannesburg-based Wilderness Safaris has, over the 28 years of its existence, built a business on sound ecotourism and conservation – in essence, acting today for a better tomorrow.

The company acts from the belief that the world’s wilderness areas will save humankind, and is actively involved in protecting wilderness areas and biodiversity, getting local communities involved, and working to make a difference in Africa.

Of the 2 700-plus people the company employs, more than 85% come from the remote rural communities in areas where Wilderness Safaris works. The company has made a concerted effort to understand their employees’ backgrounds, perceptions and culture, as these are central to its success.

The company runs a number of programmes, including community- and climate-related projects, the Wilderness Safaris Wildlife Trust, and Children in the Wilderness – all with the goal of good governance. Its conscientious and green-minded approach to business has earned awards from National Geographic, Condé Nast, the Telegraph (UK), and the World Travel and Tourism Council, among others.

In a recent press release, Wilderness Safaris CEO Andy Payne said: “The reason Wilderness exists is to conserve pristine wilderness areas and the flora and fauna that they support. We believe that in conserving these areas, and including the local communities in this process, we will make a difference to Africa and ultimately the world.”

Payne added that cultural and biological diversity is what makes the earth an interesting place, and that by joining The Long Run, the company hopes to spread the message that long-term success depends on sustainable business operations.

Conservation is a key factor in the operation of all Long Run destinations, which continually strive to support the sustainable use of natural resources. This in turn safeguards the integrity of the ecosphere. Conservation efforts common to all destinations include efficient management of energy, water and waste; land planning; and carbon footprint reduction, among others.

GER certified destinations value the people they work with, and their activities are aimed at improving the lives of all communities associated with the company. Community activities include addressing fair working conditions, local and regional relations, social ventures, social accountability, and support for small and medium enterprises, among others.

In the cultural sense, the Long Run initiative aims to strengthen intercultural relationships, while preserving cultural heritage and boosting awareness of cultural diversity. The initiative encourages a range of cultural activities, ranging from local cuisine and architecture to film and music, from crafts to sculpture, as well as sport, which is a valuable and known tool for promoting social cohesion and cultural interaction.

Commerce affects not only a destination’s sustainability prospects, but also the people who live in a particular ecosystem and who must be able to earn a decent living. Sustainable commercial enterprises provide a steady source of income, and also allow for investment into schemes that uphold the 4Cs. Long Run destinations are involved not only in eco-tourism, but also in non-tourism activities such as reforestation, agriculture and horticulture, wildlife management, and livestock ranching.