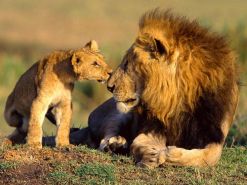 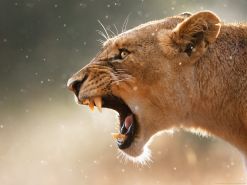 Lions are listed as vulnerable in the IUCN Red List.
(Image: Picky wallpapers)

Some of the most fascinating wildlife, including the famed Big Five, is found in South Africa, which is a top tourist safari destination. Sadly, however, the future of these animals is bleak, and some are even near extinction.

While the core conservation focus has been on rhino poaching recently, it must not be forgotten that lion populations are also in a critical position, with numbers of the king of the jungle rapidly declining. According to the Defenders of Wildlife, a national non-profit organisation that works to protect animals and plants in their natural habitats, fewer than 21 000 lions remain in Africa, down from double this number in the 1950s.

This decline has been mainly fuelled by lions’ shrinking and fragmented natural habitat and poaching, as well as poorly regulated trophy hunting and the spread of diseases in breeding lions, says the African Wildlife Foundation (AWF),an international conservation organisation that focuses on conservation in Africa.

Diseases such as animal tuberculosis (TB), caused by Mycobacterium bovis, the bacterium that causes tuberculosis in cattle, are a serious problem among wildlife species, particularly the lions of Southern Africa. National Geographic, the international society, says that the huge Kruger National Park in north-west South Africa is worst afflicted by the disease. Here, about 25 lions die from TB a year. Lions contract TB through eating infected buffalo remains in the southern region of the park, where a number of buffalo suffer from the disease.

Panthera, a non-profit organisation for the conservation of the world’s largest and most endangered cats, points out that lions have disappeared from over 80% of their historic range and are extinct in 26 countries. Seven countries in Africa are thought to have no more than 1 000 lions, namely: Botswana, Ethiopia, Kenya, South Africa, Tanzania, Zambia and Zimbabwe.

Large tracts of bushveld, where lions once roamed, have been turned over to agriculture, been destroyed or been inhabited by humans, all contributing to the decreasing lion habitat. AWF points out that as this happens, it leads to human and lion conflict. Also, near agricultural areas, lions cannot easily hunt for prey as they are often killed by farmers, who are acting to protect their stock.

The AWF operates in 15 countries in southern, east and west Africa. It has undertaken a number of conservation efforts in these areas through engaging with communities and providing them with incentives to set aside land for wildlife. Phillip Muruthi, the group’s senior director of conservation science, said the AWF also employed community scouts in these areas as a way of building community support and helping local people to become familiar with lions.

Improving the life of the king

A number of efforts have been made by conservationists and lion parks around South Africa. Drakenstein Lion Park in the Cape Winelands, for example, is actively involved in nurturing lions. The park is home to 35 lions, including five rare white lions and two Bengal tigers. It rescues abused lions from around the world and works with other animal organisations to ensure that the big cats have a safe environment in which to live.

The Born Free Foundation, an international wildlife charity that works to protect species in the wild, together with the Shamwari Game Reserve in Eastern Cape has rescued several endangered big cats. The reserve has two big cats’ sanctuaries where the promotion and protection of the species and its habitat is the main mission. Also on the reserve is the Born Free Foundation Animal Rescue and Education Centre, which houses a museum as well as an educational facility. This is to raise awareness about how animals are treated in captivity around the world.

Panthera seeks to ensure that lions have a sustainable and safe environment. Through Project Leonardo, it works to alleviate human and lion conflict by building and fixing sites that are crucial for lions’ survival, specifically the African lion, which is listed as vulnerable on the International Union for Conservation of Nature (IUCN) Red List of Threatened Species.

Project Leonardo works in a number of countries, including Mozambique, Nigeria, Tanzania, Uganda, Zambia and Zimbabwe, among others.

Susan Miller, from the department of nature conservation at the Tshwane University of Technology, is involved in projects with more than 20 reserves with the goal of improving conservation of lions in South Africa .“For my project I am also looking at the genetics of these small reserve populations to determine genetic health,” she explains.

In addition, Ukutula, a game reserve an hour outside Johannesburg, is involved in research projects with the veterinary faculty at the University of Pretoria at Onderstepoort and University of Western Cape, as well as Berlin and Hamburg universities in Germany. The research includes semen collection to be used in future for biodiversity as well as lion breeding purposes, should the animals face extinction.