When al-Qaida invaded the historic city of Timbuktu, Malian librarian Abdel Kader Haidara worked under the cover of night to save thousands of ancient manuscripts – documenting African knowledge in astronomy, poetry, religion and science – from the extremists. 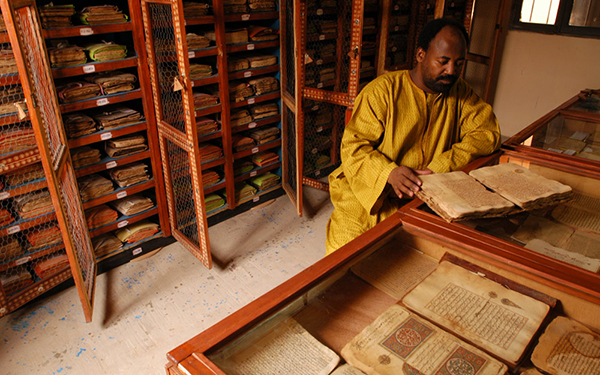 The bravery of Abdel Kader Haidara and his colleagues in the Timbuktu Library Association helped prevent the destruction of the city’s 400 000 ancient manuscripts. (Image: The Library of Congress)

The story of Abdel Kader Haidara, a book collector and librarian from Timbuktu in Mali reads more like a classic spy novel than an academic work.

When African affiliates of the Islamic militant group al-Qaida occupied his city in April 2012, he began to fear for the content of libraries and depositories which housed thousands of ancient Arabic manuscripts. So he set up a meeting with his colleagues in the Timbuktu Library Association.

“We need to take out the manuscripts from the big buildings and disperse them around the city to family houses,” he told them, as he recalled later in an interview with the Wall Street Journal (WSJ). “We don’t want them finding the collections of manuscripts and stealing them or destroying them.”

Serendipitously, Haidara had already received a grant of US$12 000 (about R179 000) from the Lagos branch of the Ford Foundation to study English at Oxford. With the manuscripts under threat, he asked if he could use the funds to protect them instead.

He managed to recruit people all over the city, including family members. What happened next was a heist worthy of the Hollywood blockbuster Ocean’s Eleven.

Haidara and his team bought 50 to 80 metal and wooden trunks a day, and identified possible safe houses around the city and its outskirts, and in the Malian capital of Bamako. During the nights, they quietly packed valuable books and manuscripts into trunks, and transported the items by donkey and cart to safe places.

In eight months, Haidara’s efforts saved countless documents. They braved al-Qaida checkpoints, and Malian soldiers in government-controlled areas. When French troops entered in January 2013, it was discovered that radicals had only managed to destroy a fraction of manuscripts – about 4 000 out of nearly 400 000.

“If we hadn’t acted,” Haidara said, “I’m almost 100% certain that many, many others would have been burned.”

Haidara’s own collection of manuscripts is kept at the Mamma Haidara Commemorative Library. It includes a Quran dating back to the 12th century, the script written on fish skin parchment and decorated with droplets of gold. His rich manuscript collection covers subjects as diverse as astronomy, poetry, mathematics, occult sciences and medicine. 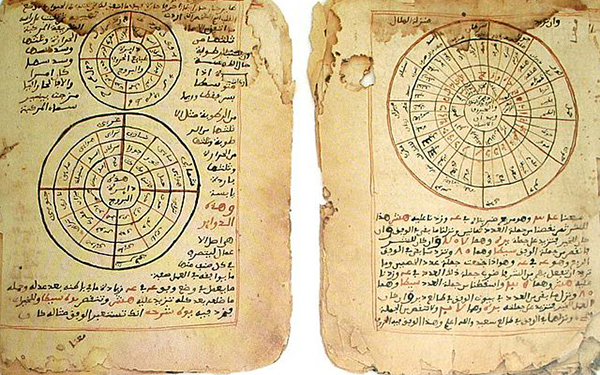 Some of the manuscripts date back to the 12th century, when Timbuktu was a vibrant trading post and a centre of knowledge. (Image: Wikipedia)

In 2014 Germany awarded the librarian with the German Africa Prize for his work to preserve Africa’s cultural heritage.

“It isn’t about me personally,” Haidara told Deutsche Welle, a German international broadcaster, when the award was announced.

“I only played my role. We know how important and how fragile cultural heritage is. Once a manuscript has been destroyed it is lost forever.”

He said his devotion to the cause is not for himself, and not only for Mali, but for all of humanity.

“This is a huge honour, not only for me, but for the all people who worked with me as well,” he said. “It is a big honour for our country Mali. It makes me very proud.”

A few of the oldest Timbuktu manuscripts date as far back as the 11th and 12th centuries, when the city was a vibrant trading post, a place where scholars met to document their discourses. After Mali gained independence from France in 1960, the world found out about the rich, recorded history.

“A lot of people were surprised because they had been told, even at school, that there were no written African historical records,” Haidara explained. “But we have hundreds of thousands of these documents in Arabic and in African languages.”

Timbuktu was once a centre of Islamic scholarships under African empires, according to National Geographic. The city had an estimated 25 000 universities and madrasahs that “served as wellsprings for the spread of Islam throughout Africa from the 13th to 16th centuries”.

The Ford Foundation, the German foreign office, Unesco and other interested parties are active in preserving the manuscripts. The foundation is also helping to find proper storage facilities, repairing the fragile documents, and having the collection digitised.

See more about the work being done to preserve the ancient documents:

Twitter users have applauded Haidara’s actions. Journalist and author Joshua Hammer has also written a book about the remarkable mission to save the manuscripts, titled The Bad-Ass Librarians of Timbuktu.

“They smuggled manuscripts out of Timbuktu by road & by river, past jihadist checkpoints” -a hero of saving heritage https://t.co/wPZIKHGz2t

Read an excerpt from the book: 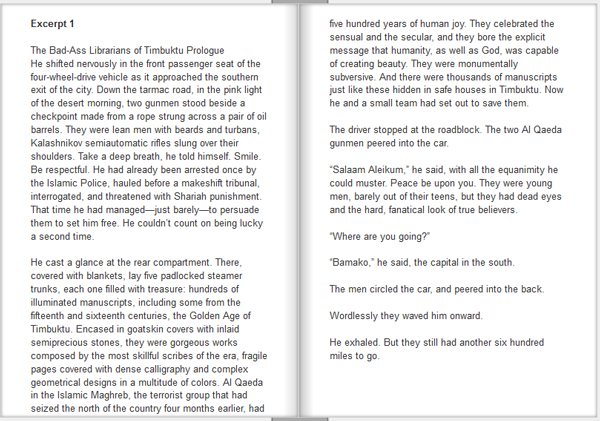 Click on the image for a larger view. (Image: Screengrab via Simon and Schuster)