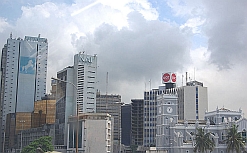 Nigeria‘s Lagos State government is calling on potential partners from the private sector to join it in building a number of major capital tourism-centred projects, among them Africa’s largest conference centre.

Lagos, situated in south-west Nigeria, is the former capital of Lagos state and was the country’s political capital until 1991, when the federal government relocated to Abuja. The city is still Nigeria’s economic and commercial capital, and an economic hub for the West African region.

As regional drivers of growth, Lagos city and state are repositioning themselves in the global tourism sector. Besides the conference centre, there are numerous tourism-related investment opportunities currently on offer, including a proposed night safari facility, holiday resorts, a boutique hotel on a golf estate, and an aquarium.

The state is also inviting private companies to invest in hotels around the Murtala Mohammed International Airport, one of Africa’s biggest. The airport is operated by the Federal Airports Authority of Nigeria and has paced its substantial growth along with that of the country’s economy. It has undergone a number of improvements in recent years and has seen a 23.5% increase in travellers between 2003 and 2008.

As Lagos State is the point of entry for almost 70% of visitors into Nigeria, the tourism sector is one that the state government urgently wants to develop. To this end it is offering a number of incentives and bonuses to investors, such as import duty exemption on tourism-related equipment, provision of basic infrastructure such as roads, utilities and communications, and provision of land at competitive rates.

Recognising that the necessary professional expertise may in many instances be found in the private sector, the Lagos State government has identified private-public partnerships as the best way forward.

Tourism will not be the only beneficiary. A comprehensive overhaul of transport, housing, water supply, waste management and commercial infrastructure is sorely needed. A bus rapid transport system is also on the cards.

Talking to TradeInvestNigeria, Lagos State commissioner for finance Rotimi Oyekan conceded that Nigeria’s international image was not as bright as it could be, and that commitment from the government was key in redressing the matter.

Oyekan said that the Lagos government is working to improve areas such as business registration, security, taxation and justice to give investors the best possible climate in which to do business.

“We are improving all these areas to ensure that the general environment for doing business lives up to the highest level of expectation internationally,” he commented. “Other areas we are working on include the granting of land rights and transfer – all to encourage a large flow of foreign direct investment.”

The proposed Lagos Night Safari, when built, will be unique for visitors to Africa. Situated in a Lagos forest, the park will offer guests the chance to experience a tropical jungle at night, with non-intrusive lighting providing views of nocturnal animals in their natural habitat.

Another special destination is the future Lekki Beach golf resort, with an estimated 60 suites in almost 10 acres of prime Atlantic Ocean property. The par 72, 18-hole golf course, designed by Florida, US-based Ron Garl, is already under construction and is expected to be playable during 2009. The hotel will offer upmarket facilities such as a spa and health centre, and a small conference centre.

The state government is looking to expand on the concept of the 65-acre, five-star La Campagne Tropicana Beach Resort, situated on the Lekki Peninsula about an hour’s drive east of Victoria Island, Lagos city’s southern-most local government area. The new resorts would offer popular tourist facilities such as water sports, fishing, hiking, and other outdoor activities.

The new conference centre will cover an area of 60 000m2. By comparison, South Africa’s Cape Town International Convention Centre, the country’s top destination for international gatherings, has a total floor space of around 55 000m2.

As the commercial capital of Nigeria, Lagos State already hosts a number of conferences and trade shows every year, but the events have outgrown the available facilities. The area is rich in natural beauty, well served by a large airport and seaport, and therefore attractive as a getaway destination for conferences.

The aquarium will be world-class and will showcase the diversity of marine life found in the Gulf of Guinea. Aquariums have proven to be top tourist attractions and many of them, such as Durban’s uShaka Marine World, fulfil important research and ecological functions in addition to entertaining the crowds.