Presidents Ian Khama and Jacob Zuma
report back on their bilateral discussions. 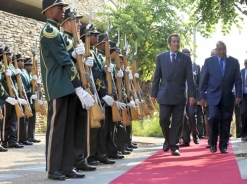 A guard of honour welcomes the two
heads of state to Freedom Park. 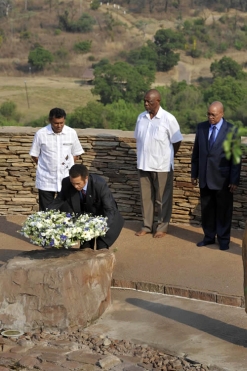 Khama and Zuma lay a wreath at Isivivane
in Freedom Park, Pretoria.
(Images: The Presidency)

Khama and his entourage of seven ministers, senior government officials and representatives from the business sector, were in South Africa on 5 and 6 October at Zuma’s invitation. The intention was to strengthen relations between the two countries.

Discussions between the two heads of state centred on the Zimbabwean political situation and the sanctions currently imposed on that country, but also turned to ways in which to create opportunities for economic and industrial development for their own nations, leading to job creation and better lives for citizens.

The two leaders also discussed the Joint Permanent Commission for Cooperation between their nations. This scheme covers a wide range of agreements on issues of mutual interest, including tourism, trade, agriculture, science and technology, health, sport, and arts and culture.

Another special area of concern was that of natural heritage, which is a significant tourist drawcard for the whole region.

After the first day of talks Zuma stated that the proceedings had gone well.

“This morning we had fruitful discussions covering a wide range of areas in our bilateral cooperation,” he said. “We are satisfied with the good relations that so happily exist between our sister countries.”

The two leaders then visited Freedom Park in Pretoria to host a wreath-laying ceremony during which they honoured the thousands who gave their lives during South Africa’s liberation struggle. The ceremony took place at Isivivane – the resting place of those who fought and died for freedom.

Zuma took the opportunity to thank Khama and the Botswana nation for giving sanctuary to many South African refugees who were hunted by authorities during those turbulent times.

Before departing, Khama invited his South African counterpart to visit Botswana. Zuma accepted, and the dates will be finalised through normal diplomatic channels.

Southern African countries have been at odds with the European Union (EU) and the US over the contentious subject of Zimbabwean sanctions, with Zuma arguing that the situation is doing more harm than good, and is in fact hindering Zimbabwe’s economic recovery. The EU and US are disputing this claim, and remain adamant that they will not lift sanctions.

During his state visit Khama added his voice to the Zimbabwe debate, saying that he too was sceptical at first, believing that the imposition of sanctions was necessary. When political unrest in Zimbabwe was at its peak about two years ago, Khama was outspoken in his criticism of President Robert Mugabe, asking SADC to close the country’s borders and isolate the ageing head of state.

“The sanctions are now starting to be a hindrance and we have to call on those imposing them to reconsider their position because the situation is better in Zimbabwe,” he said, referring to the establishment of the Government of National Unity in February 2009.

This is the power-sharing arrangement between Mugabe of the Zimbabwe African National Union – Patriotic Front, Prime Minister Morgan Tsvangirai heading his branch of the Movement for Democratic Change or MDC-T, and Deputy Prime Minister Arthur Mutambara of the MDC-M.

“As easily as they can be imposed,” said Khama at a media briefing in Pretoria, “sanctions can be removed, and I believe this should be done as a demonstration of goodwill with Zimbabwe”.

Khama added that the embattled Southern African country has shown some progress in the economic and political sectors, and the lifting of sanctions would help that upward movement. Relations between his country and Zimbabwe, which took a turn for the worse after Khama’s condemnation of Mugabe, have recently begun to improve.

“We also have concerns, but let’s remove the sanctions to demonstrate good faith and see where we go from there.”