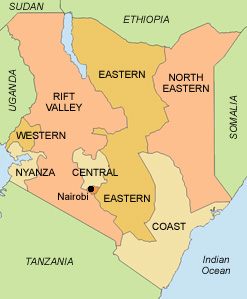 The provinces of Kenya

The government of Kenya is expanding services to meet the growing demand for voluntary medical male circumcision after the launch of a national campaign a year ago.

Results of three random trials in South Africa, Kenya and Uganda in 2005 and 2006 demonstrated that circumcision reduced the risk of HIV infection among men by up to 60%.

“We believe the launch of a rapid results initiative to scale up what we are already offering will help meet the demand,” said Jackson Kioko, director of medical services in Nyanza province. “Our target is an ambitious one to see to it that at least 1.1-million of the uncircumcised men in this country get the cut by the end of five years.”

According to the Kenya Aids Indicator Survey 2007 (PDF, 2.8 MB), 85% of men in the East African country are circumcised. HIV prevalence is three to five times higher in uncircumcised men.

There are about 1.2-million uncircumcised men between the ages of 15 and 49 in Kenya. Most of these are in Nyanza, in the west of the country, where fewer than 50% of men are circumcised.

“The trained health workers will ensure people who demand these services get them in a safe and timely manner and the training of others is ongoing across the various provinces within the country,” Kioko said.

The government also plans to roll out mobile medical circumcision. “We do not want people to opt out simply because the services are not near them and we are making arrangements that we go to them rather than them coming to us,” Kioko said.

“We will, in the near future, offer infant medical circumcision; this has the potential to help people in time before their sexual debut.”

Not the total solution

But experts stress that male circumcision must not be viewed as a complete prevention tool. “It is refreshing to see that research is being put to use,” said Kawango Agot, head of the Nyanza Reproductive Health Society.

“But we should take precautions to ensure that we constantly give information that male circumcision must work along with other HIV infection prevention strategies to be effective.

A 2007 study in Kisumu, provincial capital of Nyanza, found that circumcision did not result in more risky behaviour. Nonetheless, it found that as male circumcision became more widely promoted, there would be a need to monitor “risk compensation” associated with the procedure.