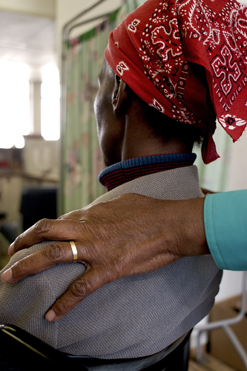 A study of Kenyan sex workers who appear to be immune to HIV could provide important clues to the development of an effective Aids vaccine.

A team of researchers from the East African country’s University of Nairobi, working with colleagues from Canada’s University of Manitoba, have been studying a group of Kenyan sex workers with apparent resistance to the HI virus for over 20 years. They recently identified more than 15 proteins in some of the women that appear to be markers for this natural immunity.

Dr Blake Ball, a professor of microbiology at the University of Manitoba, one of the lead researchers, said 140 women in a cohort of 2 000 sex workers established in 1985 have remained HIV-negative despite repeated exposure to the virus, and could provide “the best chance to identify correlates of protection [against HIV infection]”.

In a pilot study, the researchers examined genital secretions from 10 of the sex workers who appeared to be resistant to HIV and compared them to samples from HIV-negative and HIV-positive women.

They found 15 proteins present at higher levels in the HIV-resistant women than in the other women, in some cases eight times higher. “We think these proteins may be playing a role in protecting these women from HIV infection,” Ball said.

A boost for researchers

The findings have generated excitement in the HIV prevention field, especially among vaccine researchers, who have suffered several recent setbacks. In September 2007 a major vaccine trial was halted after early results showed that not only did the candidate not protect people from the virus, it may actually have put them at increased risk of becoming infected.

In July 2008, the US National Institute of Allergy and Infectious Diseases announced it would not move ahead with a vaccine trial involving 8 500 participants to test a candidate with similar properties to the one that failed last year.

“While not directly applicable to HIV vaccine design, these studies [among Kenyan sex workers] may be informative,” Ball said. “The most direct application may be towards microbicide development, and these proteins may be candidates for development of a microbicide based on human proteins.”

Microbicides include a range of female-controlled products – including gels, films and sponges – undergoing clinical trials to see whether they could help women protect themselves from HIV and other sexually transmitted infections.

Pauline Irungu, the East Africa coordinator of the Global Campaign for Microbicides, a coalition of organisations working to fast-track microbicide research, described the Kenyan research as “exciting”.

“Although it is a little too early to say if this particular study will lead to the development of new candidate microbicides, these sorts of advances yield a better understanding of the biological and socioeconomic factors that influence transmission of HIV and other sexually-transmitted infections,” she said.

“It is this type of basic research that will help us develop new tools to stop the spread of HIV.”

Ball emphasised that the findings were still preliminary and needed to be replicated in a larger cohort of women. Further research will also be needed to determine the precise biology of the isolated proteins.