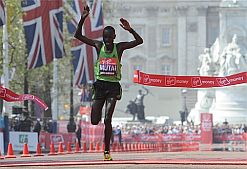 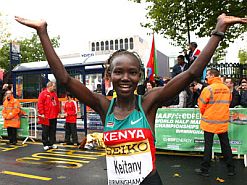 Mary Keitany, who shaved 10 minutes off
her personal best time for a marathon
of this nature, recorded the fourth fastest
time in the women’s division since the
race’s inception.
(Image: Athletics Africa)

Kenyans dominated the 2011 Virgin London Marathon on 17 April, winning both the men’s and women’s races.

The women’s division was won by Mary Keitany, who broke a record that had been in place since 2005 with a time of two hours, 19 minutes and 19 seconds.

‘My dreams have come true’

The marathon – which is run past many of the city’s landmarks including the London Eye, Houses of Parliament and Tower of London, and ends in front of Buckingham Palace – boasted a field of nearly 35 000 runners in 2011.

The event is known for attracting an array of participants in elaborate costumes – many of whom dress up and run for charity. This year was no different and one running couple even donned masks resembling the soon-to-be-wed Prince William and Kate Middleton.

The 2011 marathon saw 33 new Guinness World Records being set, including the fastest jester to complete a marathon, the fastest male and female marathoners in superhero costumes and the fastest Roman legionary.

Mutai would have shattered the world record set by Ethiopian marathon legend Haile Gebrselassie had he come in 41 seconds earlier. Although Mutai didn’t manage this, his winning margin of a minute and five seconds was the largest recorded since 1986.

Mutai, who was delighted to win his first major race, said: “My dreams have come true because I had it in my mind that one day I would win one of the five major marathons.

“I was second here and in New York last year, but today has finally come for me. My aim was just to win. I was not focusing on the time, but I tried my best to push it when I saw we were inside world-record pace at one stage.”

Keitany, who shaved 10 minutes off her personal best time for a marathon of this nature, recorded the fourth fastest time in the women’s division since the race’s inception.

“I think I surprised myself because I was running with the champion from last year and I was a bit scared, but then I started to believe in myself that I could do it and I feel very happy,” she said.

The first London Marathon was run on 29 March 1981 after John Disley and Chris Brasher secured sponsorship of US$122,000 (R830 000) a year for three years from the man’s grooming conglomerate, Gillette.

In 1993 the Golden Bond scheme was introduced to enable charities to buy guaranteed entries to the race for $488 (R3 324) each, which they give to runners unable to secure their own places. These runners then pledge a four-figure sum to the charities in return.

An estimated $813-million (R5.5-billion) has been raised through the race since 1981 for charitable causes.

Sir Richard Branson’s Virgin Group was signed up as the race sponsor in 2010 and the term will end in 2014.