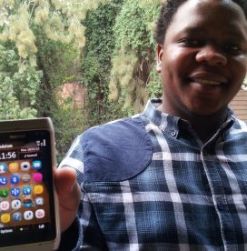 Nokia phones are the most popular for mobile banking.
(Image: Lucille Davie)

For 19-million Kenyans, their mobile phones are their bank accounts, their wallets and their way of life.

With their phones, they can withdraw cash from ATMs or agents, pay bills, transfer money, receive payments, and buy their groceries. And all without the need for a bank account, a bank or credit card, a smartphone or a mobile phone contract. They can also do it all with any phone, although Nokia is the most popular in the country, according to mobiThinking.

MobiThinking is an online tool for the marketing sector, with information and research on mobile marketing.

Kenya has 41-million people, of whom 29-million are mobile phone users. Of these, 19-million are subscribed for mobile money. Most of them are prepaid users, using phones with data networking capability.

“The crux to mobile money services is the ability to credit money to their account via a local agent (of which there is a huge network) and send money to a recipient’s mobile account, so they can withdraw the money from a local agent (or from an ATM if one is available),” states mobiThinking.

All this is possible through M-Pesa (M is for mobile, Pesa is Swahili for money), which offers users financial and payment services. M-Pesa is the most advanced mobile payment system in the developing world. All users need to plug into the system is an identity card or passport.

M-Pesa was launched in March 2007 in Kenya, the result of a student software development project. It is a joint initiative of Safaricom and Vodafone, the multinational mobile phone services company, specifically to enable Kenyans to use their phones to transfer money for a small fee. By 2012, the service was being used by 14.91-million people, or 36% of Kenyans, with customers reloading their m-wallets or withdrawing cash through a network of some 40 000 agents.

Safaricom and Vodafone are the largest mobile network operators in Kenya and Tanzania. Safaricom provides mobile and fixed voice as well as data services on a variety of platforms.

As it grew, M-Pesa introduced more financial services – the ability to pay utility bills, make purchases, buy air time, withdraw cash from ATMs, receive money from the Kenyan diaspora in some 45 countries, and have salaries and investment dividends paid.

Users pay cash to the registered agents, who then place virtual credit on their mobile phones. When the user wants cash, he or she goes to a retailer and enters a code which is registered by the retailer, who then hands over the withdrawal.

The Kenyan government has recognised the importance of ICT growth as a driver for gross domestic product, and has set the development of infrastructure and the ICT sector as a goal in its Vision 2030 plan. Through its ICT Board, it has several campaigns running to promote investment in the sector.

This is aided by a new fibre optic network in the country, expanding access to broadband. The private sector has come to the party too, establishing several ICT hubs countrywide. “The iHub is one of the best-known hubs, bringing together local technologists, investors, tech companies and hackers, and creating an ecosystem of creators, users of ICT and mobile technologies,” explains mobiThinking.

The Kenyan government has embraced the technology. Although some departments are slower than others to take it up, the Ministry of Agriculture uses mobile phones to relay daily market prices of agricultural produce. The Kenya Medical Supplies Agency has developed an SMS application to improve customer service.

Kenya’s ICT hubs have also helped address social needs in health and education. Private sector applications have been adopted, such as m-Farm, through which farmers can get the latest wholesale prices for their products via SMS; MedAfrica, which provides free health information to mobiles; and eLimu, a tablet-based learning aid.

A particular success story is Kenyans for Kenya, a response to recurring drought and famine. In January 2011, almost 4-million Kenyans were on the brink of starvation and death. The Kenya Red Cross Society appealed for funding, but got no response. By July the drought was becoming dire, and Kenyans starting listening.

Contributions from ordinary citizens were collected via mobile money transfers from over 750 000 individuals. Kenyans for Kenya proved to be the country’s largest fundraising effort, with some US$8-million raised, US$1.9-million being raised through M-Pesa alone.

Real time updates were recorded, and donors were able to keep track of donations made and the final tally. Half of the money went towards emergency food and water, and the other half towards three long-term projects to rehabilitate water infrastructure and implement integrated agriculture, health and water projects.

The campaign has won two awards: from UN Millennium Development Goals Trust and from AfricaCom. The service has been introduced to Tanzania, Uganda, Afghanistan, South Africa and India, with varying degrees of success.