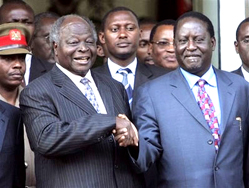 The new Kenya: President Mwai Kibaki
and Prime Minister Raila Odinga are
optimistic about the future of the east
African country.
(Image:pbs.org)

Following the post-election violence in December 2007, Kenya is to host a peace conference in February to help salvage its tainted image.

Announcing the plans on 8 January, Prime Minister Raila Odinga said the forum, which will be held in the first week of February, will play a role in bringing together more than 2 000 delegates, including local and international branding and peace experts.

The three day conference is scheduled to take place from 2 to 4 February and will be instrumental in charting a way forward for the east African nation.

“We have had many occasions to look back in the past, usually through task forces and commissions, the result has largely been to assign blame on who did or did not do what,” he said.

He emphasised that the aim of this conference, however, will be to help the country map a way forward for itself. “We will be meeting to lay the foundation of the nation we want the next generation to build on,” he added.

Themed “One Kenya, One Dream: The Kenya We Want”, Odinga said that among those expected to deliver keynote addresses will be former and current world leaders including former UN Secretary-General Kofi Annan, former Prime Minister of Malaysia Mahathir Bin Mohammed and Senegalese President Abdoulaye Wade.

The prime minister added that the expected outcomes of the conference, including findings and recommendations, will strengthen on-going efforts in national reconciliation and inter-group harmony, which he said, is the central goal of the grand coalition government.

He also said the forum will be used to demonstrate to the world that Kenyans are determined to solve their problems peacefully through open debate.

“We want to sit down as a nation and discuss tribalism or negative ethnicity as a problem. The intention will be to create strategies of promoting national unity out of the diverse ethnic groups that make what we call Kenya.”

Learning from past mistakes

A special tribunal is to be held in the east African country to bring to book those responsible for instigating the violence.

The concept of the tribunal came about after one of the recommendations, made by the Commission of Inquiry into the eruption of post-election violence, which rocked the country at the beginning of the year.

The commission, led by top legal eagle Justice Philip Waki, gave the Kenyan government a December 2009 deadline to form the tribunal, failing which; the matter would then be taken to the International Criminal Court at The Hague, Netherlands.

The United State’s ambassador to Kenya Michael Ranneberger says the American government welcome a request for them to supply investigators for the special tribunal.

“We are prepared to commit US$1.5 million (R10-million) to support electoral reform, and we would welcome a request to provide investigative experts for the Special Tribunal.”

Ranneberger said Kenya’s reformation should form part of the implementation of both the Waki Report and that of the Kriegler Commission, also set up to investigate the post-election violence.

Both the Kriegler and Waki reports recommended that the discredited Electoral Commission of Kenya be replaced and that a special investigative council be set up.

Annan has already been handed a secret envelope containing the names of the principal suspects involved in instigating the latest violent outbreak.

The envelope is currently being kept at an undisclosed UN office for “safekeeping”.

The government has also formed a cabinet sub-committee mandated to work on the implementation of the Waki Report.

The period of violence followed the disputed 27 December 2007 presidential elections in which both presidential candidates at the time, the now President Mwai Kibaki and then opposition candidate Raila Odinga (now prime minister), claimed victory in the elections.

The violence which followed the election shambles left over 1 300 people dead and about 350 000 others displaced.

The unrest tore apart Kenya’s political parties and ethnic groups as they fiercely disputed the results of the elections in which President Mwai Kibaki allegedly defeated opposition candidate Raila Odinga.

Due to the violence, traffic on highways from the port of Mombassa to Nairobi was restricted, causing massive delays in delivery of various goods.

The retail sector also took a knock, with commercial shops eventually being forced to close their doors to the public. In some cases shops were plundered or destroyed.

The pockets of Kenyans were hardest hit as the price of food across the country sky-rocketed due to insufficient supplies.

In smaller towns milk and bread became an expensive luxury and the price of fish (one of Kenya’s staple foods) tripled in the town of Kisumu, while the price of flour doubled.

In urban areas, such as Nairobi, fuel prices increased significantly with a litre of petrol costing around £1 (R15) and in some cases £2 (R30).