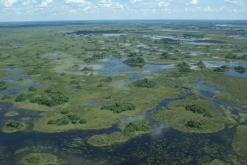 The new Kaza trans-frontier conservation
area will include the spectacular Okavango,
the largest freshwater delta on earth.
(Image: Wikimedia) 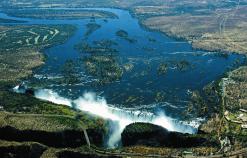 The majestic Victoria Falls, just one of the
many attractions tourists will see in Kaza. 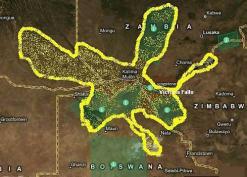 Five Southern African countries – Angola, Botswana, Namibia, Zambia and Zimbabwe – are working together to establish what will be the biggest conservation area in the world. The new nature park will be almost the size of Italy and will cover an area of 287 132 square kilometres, which is 14 times that of the Kruger Park, itself the largest national park in South Africa and one of the biggest in Africa.

The park is known as the Kavango-Zambezi (Kaza) trans-frontier conservation area, and will be situated in one of Southern Africa’s most beautiful, and fragile, tourism areas – the wetlands of the Okavango and Zambezi river basins, where the borders of the five countries converge.

Kaza was created with the support of the World Wide Fund for Nature and the South Africa-based Peace Parks Foundation, of which Nelson Mandela, the late Prince Bernhard of the Netherlands and the late industrialist/conservationist Dr Anton Rupert are the three founding patrons.

According to the Peace Parks Foundation, the park is the most significant conservation effort undertaken in Africa in the last 100 years, and will eventually be home to 250 000 African elephants, the largest single population of the great animals to be found on the continent.

Since it embodies the principle of the peace park, where animal movements are not constrained by artificial human boundaries, Kaza will also accommodate freer movement of tourists in the area. “For instance, if a tourist is in Zambia and wants to go the Caprivi now, they will have to go through about four international border posts, but once the Kavango-Zambezi is established, tourists could move there freely,” said Peace Parks CEO Werner Myburgh.

Kaza is one of 20 trans-frontier parks in the Southern African Development Community – some are already in existence while others are still in the planning stages. The Great Limpopo Transfrontier Park, which straddles Mozambique, South Africa and Zimbabwe and incorporates the Kruger Park, is Africa’s biggest game park at the moment.

This move is expected to boost tourism substantially, create jobs, and generate sustainable revenues for rural communities as a result. Conservation and tourism are therefore seen as the key drivers for socio-economic development of this region.

With preparations in full swing, the park is expected to become operational in 2010, and it is hoped that Kaza will become one of Southern Africa’s premier tourist attractions, especially ahead of 2010 and beyond. The park’s feasibility study, undertaken by the Peace Parks Foundation and the Development Bank of Southern Africa, reveals that it could attract anything up to 8-million tourists annually in its own right.

Kaza will incorporate 36 national parks, game reserves, community conservancies and game management areas, including the Caprivi Strip, the salt pans of the Kalahari Desert, the Chobe National Park, the mighty Victoria Falls, a World Heritage Site and one of the seven natural wonders of the world, and the Okavanga Delta, the largest Ramsar site in the world. The Ramsar convention, to which South Africa is a signatory, is an international treaty for the conservation and sustainable use of wetlands.

The Victoria Falls has, according to reports, been designated as the hub of the park, whilst administration will be centred in Katima Mulilo in Caprivi, Namibia.

The Kaza memorandum of understanding was signed in December 2006 by ministers of environmental and tourism affairs from the five participating countries. In June 2008 the Zambian component of the park was kick-started with the ceremonial handing over of the Zambian Integrated Development Plan to Zambian Minister of Tourism, Environment and Natural Resources Michael Kaingu.

The document comprises three main chapters: The Place, The People and The Plan, and lays out the way forward for successful implementation of the park.

The establishment of the Kaza trans-frontier park will allow large herds of wild beasts to again assume their tradition migration routes. Botswana’s elephant population is the largest in Africa, while Angola has virtually no elephants, but once the park is in place the animals will once again be able to move between countries. This will also mitigate the need for culling.

With peace recently restored in Angola since the death of Jonas Savimbi in 2002, there is huge potential for Kaza to help replenish the wildlife of the area, which was badly depleted by the civil war. Once cleared of landmines, said Myburgh, the area will offer a new home for vast numbers of animals, particularly for the elephants in northern Botswana, some of which have already begun to wander over.

The challenge, he continued, was to remove the boundary fences and the mines, and move informal human settlements away from rivers and roadsides so that neither animals nor humans are placed into danger. It is estimated that only 2.5-million people call the region their home.

Kaza boasts remarkable diversity in animal, bird and plant life. The area features mopane and miombo woodlands, the famous wetlands areas, around 3 000 species of plants, and over 500 species of birds. On the wildlife side, besides the large elephant population, visitors can see buffalo, hippopotamus and lion, a variety of antelope including sitatunga, puku, lechwe, roan, sable, and eland, as well as zebra, wildebeest, wild dogs, spotted hyena, and many more.