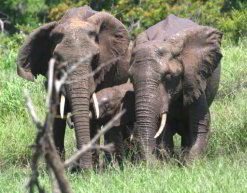 The elephant population in the new
conservation area is expected to number
around 250 000 individuals.
(Image: Luke Harwood) 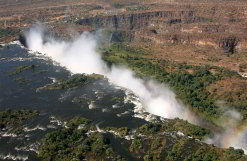 Water vapour rising into the air above the
mighty Victoria Falls has earned it the
the name of Mosi-oa-Tunya, or “the smoke
that thunders”.
(Image: Ferdinand Reus, Flickr)

A vast transfrontier park of almost 450 000 square kilometres, stretching over five Southern African countries and connecting 36 national parks and other managed areas, has been signed into being.

The biggest conservation effort ever, it includes some of the most breathtaking protected areas on the planet, and will stretch over parts of Angola, Botswana, Namibia, Zambia and Zimbabwe.

Once fully operational it will be roughly the size of Sweden.

The Kavango Zambezi Transfrontier Conservation Area was legally established on the last day of the Southern African Development Community (SADC) conference held in Luanda, Angola, in August 2011. The signing followed a feasibility study initiated by the five participants in 2006.

The implementation of the conservancy is overseen by the Peace Parks Foundation, with the help of integrated development plans (IDPs) to ensure that the process unfolds smoothly. Zimbabwe and Zambia have completed their IDPs, while Angola’s is nearing completion.

IDPs for Namibia and Botswana will get underway before the end of 2011.

“It’s the largest protected tourism zone in the world,” an official from the 15-nation SADC announced at the time of signing the deal.

This conservation zone is located in the Okavango and Zambezi river basins and boasts an impressive array of natural attractions:

Once all development plans are integrated the conservancy will boast the largest contiguous population of African elephant on the continent, estimated to be about 250 000.

Where the smoke thunders

Rated as one of the seven natural wonders of the world, Victoria Falls is located on the border between Zambia and Zimbabwe on the mighty Zambezi River. It’s considered to be the largest falls in the world in terms of the size of the sheet of falling water, although it isn’t the highest or the widest.

Victoria Falls was so named by Scottish explorer David Livingstone in honour of the reigning queen, but the local Kololo tribe refers to it as Mosi-oa-Tunya, meaning “the smoke that thunders”.

The surrounding area encompasses smaller nature reserves such as the Mosi-oa-Tunya National Park, the Victoria Falls National Park and the Zambezi National Park.

The latter two parks already allow free movement of animals between them.

Oasis in a dry land


Botswana’s Okavango Delta – also known as the Okavango Swamp – is the largest Ramsar site in the world.

It is seasonally formed by the Okavango River as it spreads out across a 15 000 square kilometre area, creating an oasis in an otherwise bone-dry region.

The Ramsar Convention was signed in the town of Ramsar, Iran, in 1971. It is an intergovernmental treaty that commits member countries to maintain the ecological character of their wetlands.

The preservation of these sensitive areas is viewed as a matter of international importance. Members are encouraged to plan wisely or in a sustainable manner for any activities that may affect the wetlands in their territories.

The Okavango and Zambezi River basins contain some of the world’s richest areas of plant and animal biodiversity. If managed successfully and with vision, say authorities in the country, this natural wealth could give rise to a thriving ecotourism industry.

The region is home to endangered species such as cheetah, African wild dog, black sable and black rhino.

About the Southern African Development Community

SADC came about as a result of member countries’ historical and cultural similaries, which gave rise to a desire to create greater economic prosperity, freedom and social justice for their citizens.

The catalyst for SADC’s formation was the Southern African Development Coordination Conference held in Lusaka, Zambia, in 1980. Here the Lusaka Declaration (Southern Africa: Towards Economic Liberation) was formally adopted by the nine founding member countries.

SADC aims to promote sustainable and equal economic growth and socio-economic development for its members. Member nations in turn commit to the values of good political, economic and corporate governance, as they strive for democracy, transparency and the respect for the law, and full participation by civil society.

Among its successes to date, the organisation created a document that details norms and standards for elections, and a model law on HIV. It has also laid down benchmarks for democratic parliaments in Southern Africa.