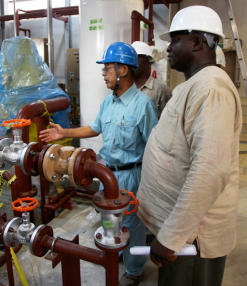 Japanese finance and expertise have rehabilitated the power station in the Sierra Leone capital of Freetown. 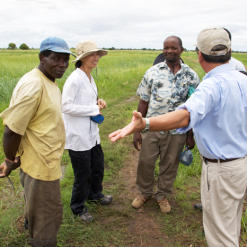 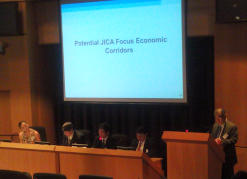 The Jica study team was on hand to explain the results of their findings.
(Image: Janine Erasmus)

Because the results were still in draft format, comments and suggestions from attendees were welcomed for inclusion into the final version, the release date for which has not yet been made known.

The agency started the study in July 2012, following a similar exercise conducted in 2010. However, the 2012 study provides more specific objectives than the 2010 study, according to Jica, and is a response to the need to reduce poverty and economic disparities within the region, and to intensify economic and industrial development and job creation.

The earlier study suggested three growth scenarios – one based on mineral resources development, one through intra-regional trade, and the third by diversifying industry through global trade. These scenarios, said representatives from Jica’s Pretoria office, were too broad to qualify for future developmental assistance, the provision of which is one of the agency’s core functions.

In 2012, potential development along the eight corridors, as proposed by Jica, is based on more specific development scenarios tailored for each corridor, but also on overall scenarios that cover multiple countries and give a perspective on the entire Southern African region.

These scenarios form the basis of potential Jica assistance with regional infrastructure and economic and industrial development.

Regional integration is already happening through bodies such as SADC and SACU. Many countries have national development plans in place, said Jica, which give detailed steps for development going forward, so the Jica report is a suggested strategy more than a plan and as such, does not aim to clash with national development priorities.

With this in mind, it is up to authorities and businesses in the countries themselves to initiate the co-operation process, assess the study to determine how they can best use the suggestions or incorporate them into existing plans, and contact Jica for assistance.

Potential for growth in Southern Africa

The 2010 study focused heavily on the transport sector. Out of 18 economic corridors – trade routes that arise between land-locked countries and their nearest ports – assessed in 2010 in the Southern and Central African regions, eight were identified as needing special attention, because their development could mean a boom for the region. They are:

These are all multi-modal routes – that is, they combine road, railway and port facilities to transport goods and if functioning efficiently, will make it easier to get goods to markets. However, the condition of the facilities for the most part is not ideal. If the region is to reach the level of economic activity that Jica suggests is possible, then railways and roads need rehabilitation and upgrading, and ports must be expanded or built from scratch.

The most recent study uses an innovative approach of deciding on a favourable outcome after 20 years, and working backwards to decide what would have had to happen years ago to achieve that desired outcome. This differs from conventional methods of extrapolating from the past to decide on a vision for the future.

Jica envisions a highly developed regional mining and manufacturing sector and supporting industries in 20 years, with all countries in the region exporting to regional and global markets.

Examples suggested by Jica include production at Mozambique’s Mozal aluminium smelter, with the products shipped out through the Maputo corridor; the development of heavy chemical industries in Mozambique and Tanzania with shipping through the Nacala and Dar es Salaam corridors, and increased copper, iron and steel production in Zambia, using the Nacala and North-South corridors to transport the goods to market.

Heavy chemicals, as opposed to fine chemicals, are those produced in vast quantities and are often of a lower grade.

Optimal operation of the corridors will depend on infrastructure and facilities. For instance, Bagamoyo in Tanzania has the potential to become a thriving economic town in 20 years, with a new port, a CBD, urban development and recreational and tourism facilities. But because Bagamoyo is a Unesco-designated world heritage site and is of great historical value, it is vital that development proceeds with caution to preserve the tourist industry.

Power supply in the region is inconsistent but grid accessibility is possible in all but a few cases. There are large hydropower projects in development along the Zambezi and its tributaries and smaller projects in Tanzania, Malawi and Zambia, as well as coal thermal and gas turbine projects in a number of countries including South Africa.

Room for improvement in agriculture and ICT

With a general downward trend in production over the past three decades, the Southern African agriculture sector can also be improved significantly. Here Jica has pointed out four aspects for attention – productivity growth in cereal production; diversification towards higher-value products; expanding agro-processing activities; and the geographical diversification of production.

In several Southern African countries the agriculture sector is the major employer, according to the UN’s Food and Agriculture Organisation, but regardless of the size of their agricultural workforce, all countries can achieve increased agricultural productivity, with a decreasing reliance on imports and greater food security as a result.

According to Jica, the under-use of fertilizer is a significant factor in this situation, but can easily be addressed. The organisation was encouraged to note that in Malawi and Zambia cereal production has been on the rise since 2004, and this is attributed partly to fertilizer use.

Jica suggests that commercial farming clusters be developed along the Beira and Nacala corridors and along the North-South corridor neat the Zambia/Zimbabwe border, as well as special economic zones for agri-business at key cities along the Dar es Salaam corridor.

The organisation goes on to explain how increasing urbanisation and unemployment could be used as an opportunity for developing new industries in metropolitan areas. The establishment of labour-intensive light industries and value-added agriculture and agro-processing industries near urban centres would provide an opportunity to absorb the unemployed population while simultaneously providing the boost that the sector needs.

As an added bonus, the focus on labour-intensive industries will mean that labour costs in Africa could start to compare more favourably with those of Asia.

In terms of ICT, strengthening this sector will have an impact on job creation because it accommodates a broad spectrum of labour, from unskilled to highly trained workers.

Bringing more investment to the region

All of these suggestions will cost money, but Jica is in a position to assist with capital grants and technical training.

The agency has however made the assumption that certain factors will be in place for the scenarios to work.

These factors include the presence of political will; adequate institutional capacity; infrastructure that can cope with the new pace; the role of the private sector in transforming the regions industrial structure; and the ongoing task of job creation.

Apart from political will – which Jica has no control over – the other factors have been taken into account in the 2012 study.

If the scenarios put forth in the study are taken up, Jica anticipates that the region will become more attractive as a foreign investment destination.