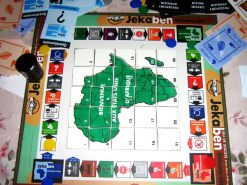 Uniting the continent in the game is
hopefully the first step to achieving
it in reality. (Image: Idy Sy for NPR)

Jekaben, a recently launched board game, aims to unite Africa in a fun and educational way by encouraging players to broaden their knowledge of the continent in topics such as geography, economics, culture and politics, while completing a map of Africa.

The game is the creation of Senegalese entrepreneur and game designer Salif Tidiane Ba, based in Dakar. In the Malian language of Bambara, also spoken in Senegal and a few other West African countries, Jekaben means “let us work together”.

Ba hopes that Jekaben will contribute to achieving what many distinguished African leaders, including former South African president Nelson Mandela, have long wished for: a united continent. Through the light-hearted game Ba wants to encourage the younger generation of Africans to embrace the pan-African vision.

“The aim is to make the African youth aware of the need to work closely together and to quickly achieve the United States of Africa,” he says.

The concept has its supporters and opponents – among the former are Libya, Ghana, Senegal and Zimbabwe. However, others such as Nigeria, Kenya, and South Africa – Africa’s powerhouse – have not rushed to express their optimism.

Jekaben is currently available in English, French and Arabic, but Ba hopes to soon have it translated into more languages of Africa, including Portuguese, Spanish, Swahili, Mandingo, Hausa and others.

It is played on a board with 25 blank squares in the middle surrounded by a path of 28 squares along which the players move their game piece. The squares on the perimeter contain “safe spots” as well as risk boxes such as conflict, malaria, or HIV and Aids.

The goal is to build the map of Africa in the centre while answering Trivial Pursuit-type questions, of which there are 100, about the continent. A piece of the map may be placed after a series of correct answers. Certain map pieces also trigger the awarding of a United States of Africa passport, of which there are 20.

Players move by throwing a pair of dice, and trade in banknotes representing the old African currency of shell money. The shell of the money cowry (Cypraea moneta) has been used as currency in many countries around the world and in West Africa it was legal tender until the mid-19th century. The tradition finally died out in the early 20th century as modern currencies took over.

Players are dealt cards that help them progress around the board. For instance, drawing a peace card will allow the player to leave a conflict box. Picking up a malaria card, depicting a mosquito net, enables one to escape the malaria box. Other cards allow players to cash in on new opportunities in agriculture, industry, infrastructure development and mining.

Ba has included a set of 16 Sage cards, representing renowned African leaders, which allow the card-holder to move faster towards the completion of the united continent.

It comes as no surprise that among them are Nobel Peace laureate Nelson Mandela, the revered Emperor Haile Selassie of Ethiopia, pan-African champion Kwame Nkrumah of Ghana, and the poet Léopold Sédar Senghor of Senegal – considered to be one of Africa’s most important intellectuals.

However, the presence of the likes of eccentric Muammar al-Gaddafi, not generally known as a sage, and controversial Yahya Jammeh of The Gambia, who took control in a coup, may raise a few eyebrows. Ba maintains that his choice of sages is completely his own. The deciding factor for sagehood, in his opinion, is their vision of a united Africa.

The game ends when the last piece of the map is placed. The person with the most passports is the winner.