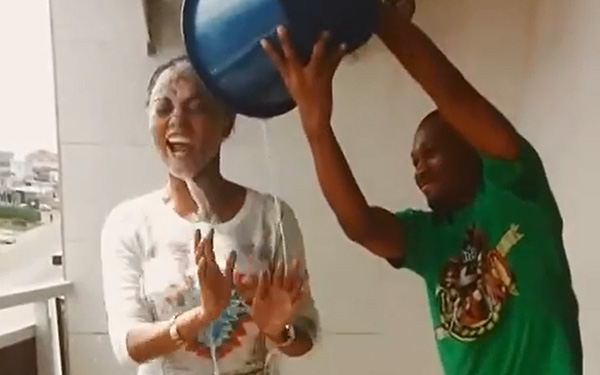 Ice-cold, soapy water … Ivorian Twitter celebrity Edith Brou’s Lather Against Ebola campaign encourages participants in the soap bucket challenge, an Ivorian variation of the ice bucket challenge, to donate bars of soap and bottles of antiseptic instead of cash.

• Mobile phone boost to African internet
• #BringBackOurGirls shows the power of social media in Africa
• How Africa tweets
• So this giraffe walks into a restaurant … and the video goes viral
• Africa refocused: images of Ghana

Ivory Coast is giving the global sensation of the ice bucket challenge a new – and educational – meaning as a way to spread the need for hygiene in the face of the deadly Ebola epidemic affecting its neighbours.

A brainchild of one of Ivory Coast’s most prominent Twitter users, Edith Brou, the Lather Against Ebola campaign encourages participants in the “soap bucket challenge”, an Ivorian variation of the ice bucket challenge, to donate bars of soap and bottles of antiseptic instead of cash.

The original ice bucket challenge was a hugely successful viral campaign in which people challenged their friends to film themselves pouring ice water over their heads. It has raised millions of dollars worldwide to fund research into a fatal degenerative nervous disorder called amyotrophic lateral sclerosis, or ALS.

The Lather Against Ebola campaign, with the French hashtag #MousserContreEbola, has gone viral on Twitter and Facebook in the West African region, helping raise awareness about a disease that has claimed thousands of lives in Guinea, Liberia, Sierra Leone and Nigeria.

With 1.4-million Facebook users in Ivory Coast, the internet has played an increasingly important role in politics and society in the country.

Brou kicked off the campaign in August this year, posting a video of herself standing on a balcony at her workplace in Abidjan. “Against Ebola, you need good hygiene,” she says in the video before a bucket of soapy, ice-cold water is dunked on her head by a friend.

For her efforts, Brou’s video was an instant hit on social networks, garnering 4 000 hits. She then challenged three fellow bloggers including Nouho Bamba, who goes by the pseudonym La Rigueur Bino. Bamba claims to have 150 000 followers on social media.

Subsequently, Bamba came up with his own soap bucket challenge video. In it, Bamba gets a little quirkier in his approach and throws himself – fully dressed in a business suit complete with suitcase in hand – in a swimming pool. The video got more than 52 000 hits.

“I knew that jumping into a pool would create a buzz,” said Bamba. “Today, even children need to understand what Ebola is.”

Besides being a critical tool to educate and raise awareness of Ebola, the soap bucket campaign is a good example of the power of social media to bring people together for a just cause, and also an opportunity for bloggers to showcase their popularity. One blogger, Israel Yoroba, has composed a song entitled “Stop Ebola” that is being used a waiting tune by a local phone operator.

Bloggers have been able to put key issues onto the public domain, and good examples include highlighting the negligent death of a young model at a hospital in Abidjan earlier this year and keeping people informed about the New Year’s stampede which led to the death of 61 people outside Abidjan Stadium in 2013. Social networks also proved to be a powerful tool during the violence that followed the disputed election in 2010, when more than 3 000 people were killed in five months. A hashtag #CIVsocial was used on Twitter to help coordinate relief efforts and share information.