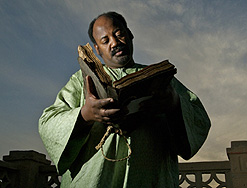 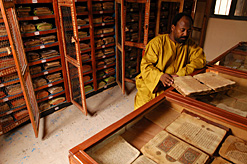 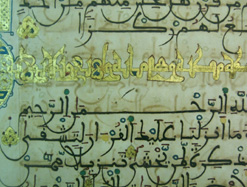 A number of manuscripts are elaborately
detailed with gilded script.
(Image: Ford Foundation) 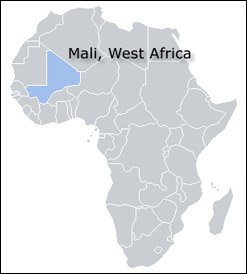 South African president Kgalema Motlanthe was recently in Timbuktu, Mali, to take part in the handover of that country’s newly completed archival and library facility, custom built for the priceless Timbuktu Manuscripts. The ceremony took place on 24 January 2009.

Motlanthe officially inaugurated the state-of-the-art facility, built to house one of Africa’s greatest cultural treasures, and handed it over to President Amadou Touré and the people of Mali. He was accompanied by his predecessor, former president Thabo Mbeki, and Deputy Minister of Arts and Culture Ntombazana Botha.

South Africa has played an important role in the construction of the building, as well as the training of Malian staff. The unveiling of the new facility sees an important collaborative programme come to fruition.

“It is in the spirit of African cooperation and with the desire to preserve Africa’s ancient manuscripts, that this building is the outcome of collaboration between the peoples and governments of the Republic of Mali and the Republic of South Africa to make them accessible for the promotion of the African Renaissance,” commented Botha, who coordinates the project with Minister in the Presidency Manto Tshabalala-Msimang.

The Timbuktu library project is a flagship cultural initiative of the New Partnership for Africa’s development and started when then President Mbeki made a state trip to Mali in November 2001.

Mbeki took time to visit Timbuktu and witnessed firsthand the conditions under which the collection of medieval documents were kept at the time. Battling not only inadequate facilities but also the harsh climate of the region – Timbuktu sits on the western edge of the unforgiving Sahara desert – staff were nonetheless diligent in their work and devoted to their task.

Mbeki later confessed to being immensely moved by the efforts of staff to preserve the precious slice of African history, and decided there and then to assist in the conservation of the documents. The South African government issued a pledge to build a new library to ensure that the fragile manuscripts were kept under climate-controlled conditions.

About 25 000 manuscripts now have a new home. The building reportedly houses an auditorium, administration offices, conservation storage and workshop spaces, exhibition spaces, an outdoor auditorium for public events, and a general public library for residents. It also offers advanced facilities for visiting scholars.

Mbeki and his Malian counterpart, former president Oumar Konare, signed a bilateral agreement in 2001, which saw the establishment of the Timbuktu Trust. The Trust was chaired by South Africa’s former Minister in the Presidency Essop Pahad and its mission was to raise funds for building. About R60-million (US$6-million) but 60% was donated to the fund through the generosity of the private and public sectors.

The agreement also set out the areas of co-operation between the two countries. These included skills training, raising public awareness, and providing proper protection for the manuscripts.

South African archivists supervised specialised training in conservation techniques for Malian representatives between 2003 and 2005. At the same time the two countries organised a series of conferences, cultural exchanges and publications to raise awareness of the importance of the collection. In 2008 a selection of 40 manuscripts left Mali for the first time ever to tour museums in South Africa.

The Timbuktu Manuscripts are written in Arabic and local languages, and cover topics as diverse as ethical behaviour, Islamic doctrine, Sufism, the use of gold as currency, treatment of disease, and local correspondence. More than 700 000 documents survive under the care of archive staff and in private libraries, providing a rich commentary of life at the time. Most are in a fragile condition.

Timbuktu is a city steeped in cultural history, and is inscribed on the United Nations Educational, Scientific and Cultural Organisation’s (Unesco) register of World Heritage sites. The manuscripts themselves are part of Unesco’s Memory of the World project, which aims to preserve irreplaceable archive holdings and library collections around the world.

The city was founded around 1100 C.E (Common Era, equivalent to A.D.) and quickly established itself as an important stop along the lucrative gold-salt trade routes in the region.

Even before the European Renaissance, the ancient city was an important centre of spiritualism and learning during the 15th and 16th centuries. This was the heyday of the Songhai Empire, one of the largest African empires ever known.

Timbuktu was home to the renowned Koranic Sankore University and other institutions, and became a hub for the propagation of the Islamic faith throughout Africa. Scholars came from all over the Islamic world to improve their knowledge. The existence of the manuscripts is important in that it indicates a history of the written word in Africa, in contrast to the belief that the oral tradition took precedence.

Timbuktu boasts three magnificent mosques, Djingarey-Ber, Sankore and Sidi Yahia, which attest to the grandeur of the city during its golden age.

The new library is built in the adobe style of Timbuktu, blended with contemporary architectural styles. It is designed to protect the manuscripts against the threats of insect damage, natural elements such as dust and wind, chemical dangers such as acidity and moisture, and the perils of careless human handling.