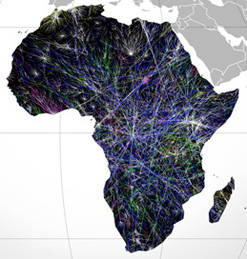 Most African countries remain heavily
reliant on slow or expensive forms of
connectivity, such as dial-up and satellite.
However, they are beginning the move to
broadband.

Businesses across Africa are expecting a revolution in internet access, technology and costs as a result of the rush of new undersea cables connecting the continent.

More than 90% of business decision-makers across Africa are expecting prices to drop and competition to increase dramatically, according to the Telecoms Trends in Africa 2010 report, released today by World Wide Worx and Database 360.

The survey, conducted among 1 182 internet-using small, medium and large businesses across 20 African countries, also revealed that most African countries remain heavily reliant on slow or expensive forms of connectivity, such as dial-up and satellite. However, they are beginning the move to broadband.

“Our interviewers encountered tremendous enthusiasm for the internet in all countries we surveyed,” says Louise Robinson, managing director of Database 360. “There is little doubt that, in this new connectivity era, the very nature of most businesses is changing.”

Database 360 operates a call centre in Cape Town, from which the respondents were interviewed telephonically. The study was compiled and the data analysed by World Wide Worx, a South African technology research organisation.

“ADSL is fast becoming the standard form of business internet access across Africa – more than 40% of businesses in these 20 countries are using it,” says Arthur Goldstuck, managing director of World Wide Worx. “However, we can see the limitations of existing infrastructure from the fact that satellite connectivity remains a key part of the mix.”

More than one in five respondents said they were using satellite connectivity, with a similar number planning to add it to their options.

“Satellite is the most expensive means you can possibly use to access the internet,” says Goldstuck. “The continued appetite for it tells us that, even though there is an expectation for better and cheaper connectivity, the reality on the ground remains one of limited infrastructure.

Countries like Mauritius, Ivory Coast and Namibia are already showing strong growth in ADSL use by business, while Angolan businesses indicate the highest anticipated growth for this form of broadband.

“It’s amazing to see how the level of internet usage shoots up wherever the new undersea cables have landed and fibre optic networks have linked the cables to urban centres,” says Robinson. “The East Africa countries, especially, are taking to social networking as a business tool to a greater extent than almost anywhere else in Africa.”

The survey highlights Kenya and Uganda as the biggest African users of social networking for business. However, even landlocked countries that have recently seen major upgrades to their fibre optic networks, such as Botswana and Zambia, are also moving rapidly in this direction.

The study further explores the use of general internet applications, email on cellphones and the emergence of cloud computing in Africa.

Go to the World Wide Worx website for more information and to download an executive summary of the report.